Odesa National Academic Theater of Opera and Ballet is amazing!

Welcome to the place where half of the photos of our city originated! This exquisite architectural masterpiece is beautiful both inside and outside, where a great space for walking and running is found around the fountain to its side. 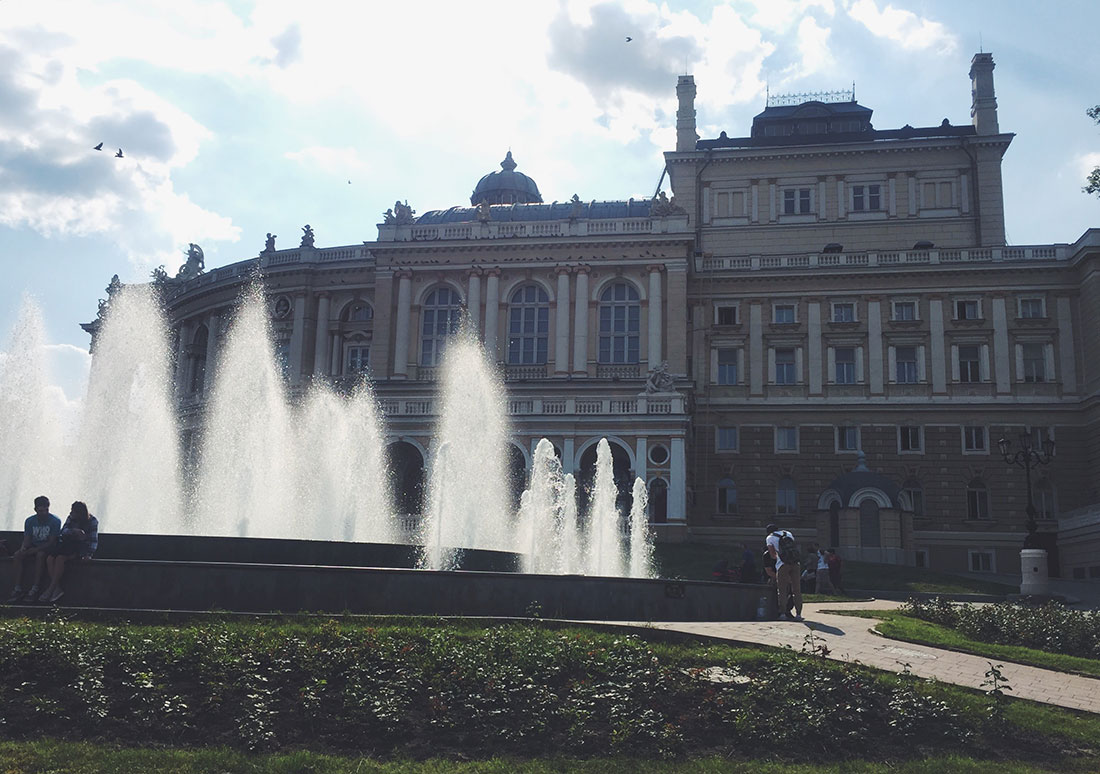 Theatrical Odesa has been leading its history almost since the founding of the city. The Opera and Ballet Theater can rightly be called an elder among a number of its cultural institutions. The theater is interesting not only for its architecture but also rich creative history. The credit for the development of the theater is due to the musical culture in the south of the country.

Odesa received the right to build a theater in 1804 (becoming the third city with a theater in the Russian Empire), and in 1809 it was already built. The author of this project was the famous French architect Jean-François Thomas de Thomon, the author of a number of buildings in St. Petersburg. It was this building that Pushkin visited during his stay in Odesa in 1823-1824. 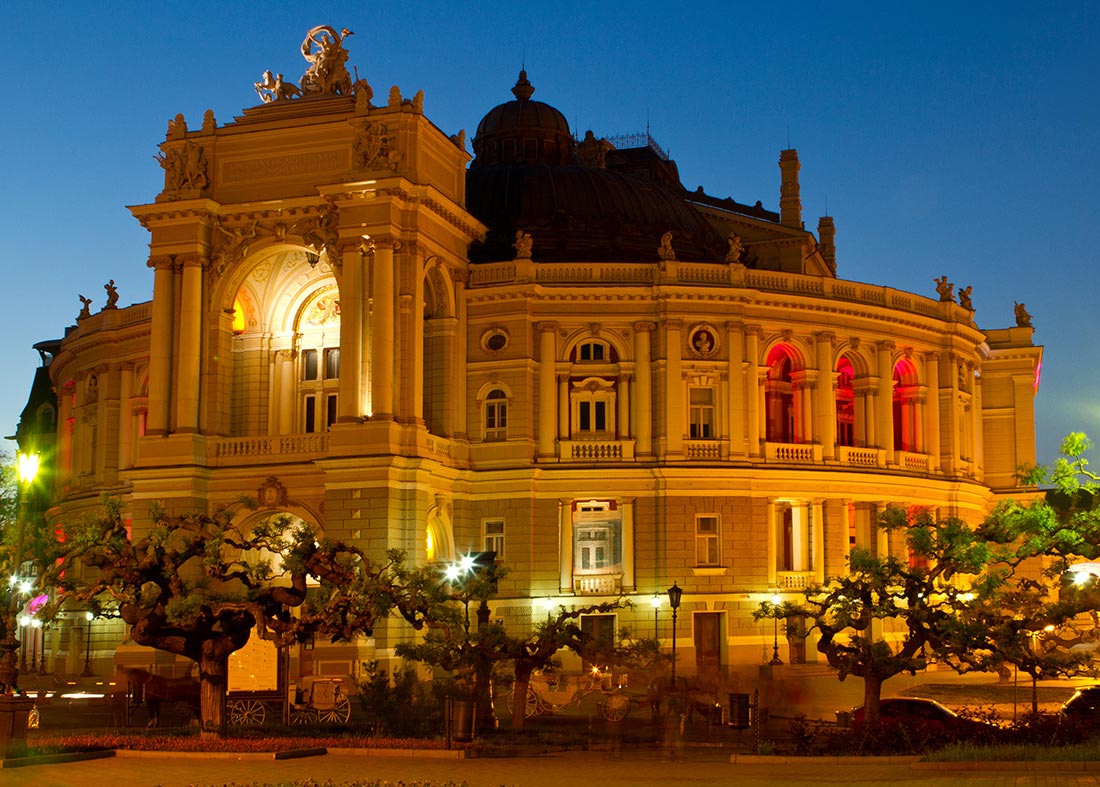 The Odesa National Academic Theater of Opera and Ballet is among Ukraine's greatest architectural monuments and is one of the most beautiful theaters in the world. The theater has an Italian baroque facade, with a Renaissance–style entrance and stone figures depicting scenes from Aristophanes and Euripides.

There are also allegorical stone sculptures of the Goddess of Tragedy, in a chariot drawn by four panthers; Orpheus, charming the centaur with his music; cherubs playing, singing, and dancing teaching a young girl; there are busts of Pushkin, Gogol, Griboyedov and Glinka, representing poetry, comedy, drama, and music. 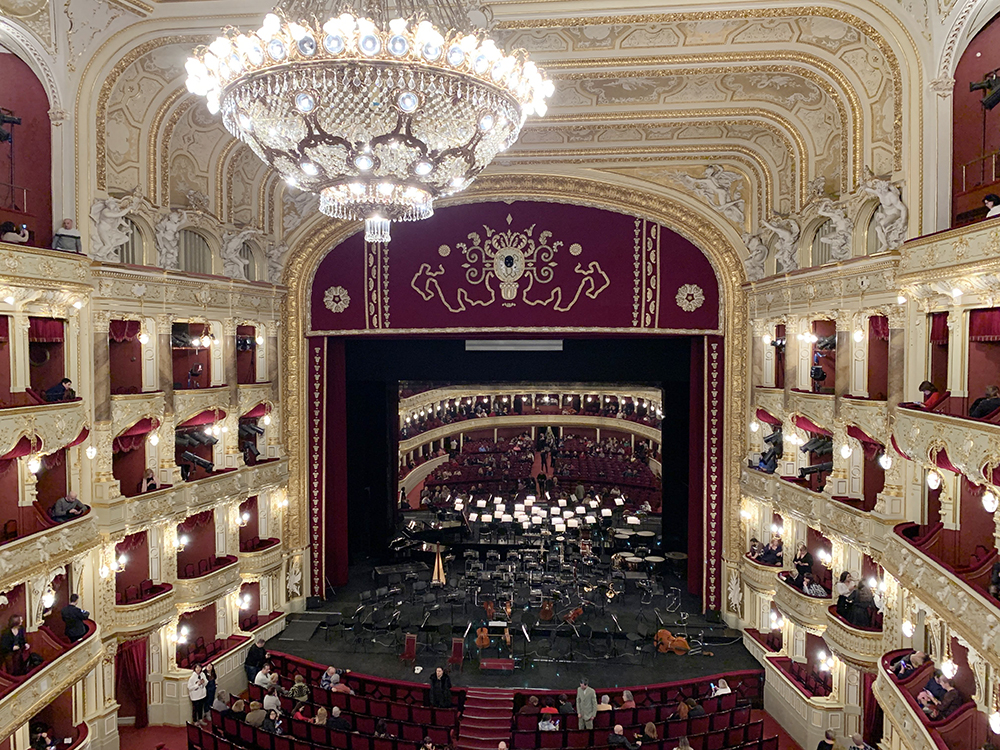 The auditorium is in the style of Louis XVI, with a huge bronze chandelier weighing more than a metric ton that looks as light as feather due to the filigree finish of the cut-class pendants, surrounded on the ceiling by frescoes depicting scenes from Twelfth Night, A Midsummer Night's Dream, A Winter's Tale and As You Like It. The architects, remembering a fire in a Viennese theater, provided the foyer with twenty-four exits. We strongly recommend every visitor take a tour or visit a show at this magnificent structure. 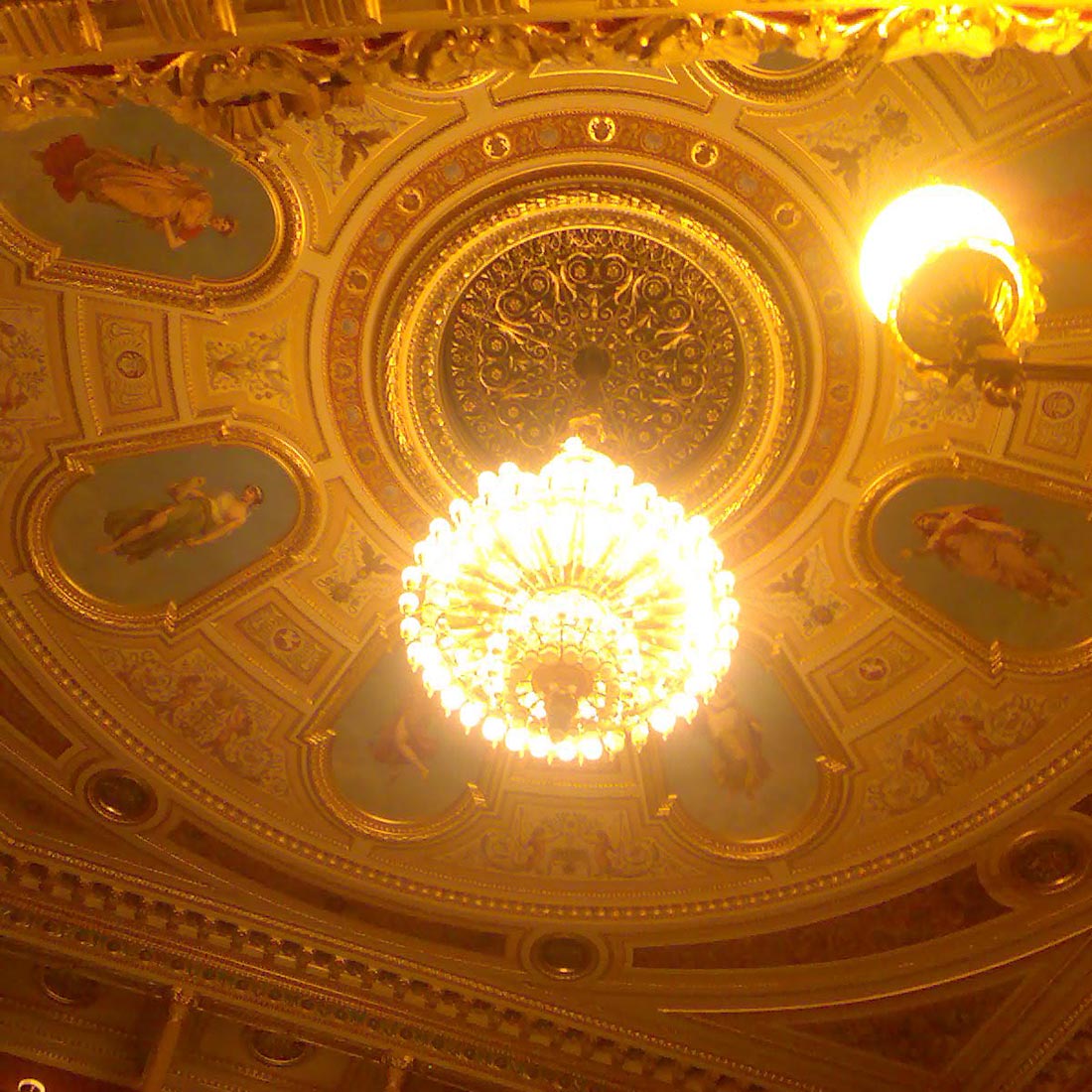 The Odesa Opera and Ballet Theater is not only one of the most famous and beautiful sights of the city of Odesa, but also one of the most beautiful theaters in the world. It is rightfully included in the seven wonders of Ukraine.

The history of the theater begins almost from the time of the founding of the city. After the events of 1873, when the Opera was completely burned down, people began to forget about this masterpiece. But in 1887, under the guidance of architects Hermann Helmer and Ferdinand Fellner, a new theater was opened.

The building is made in the Viennese Baroque style, very popular in European culture of the 16th through the 18th centuries. In terms of technical data and planning, the Opera House is not inferior to the best monuments of architecture in Europe. 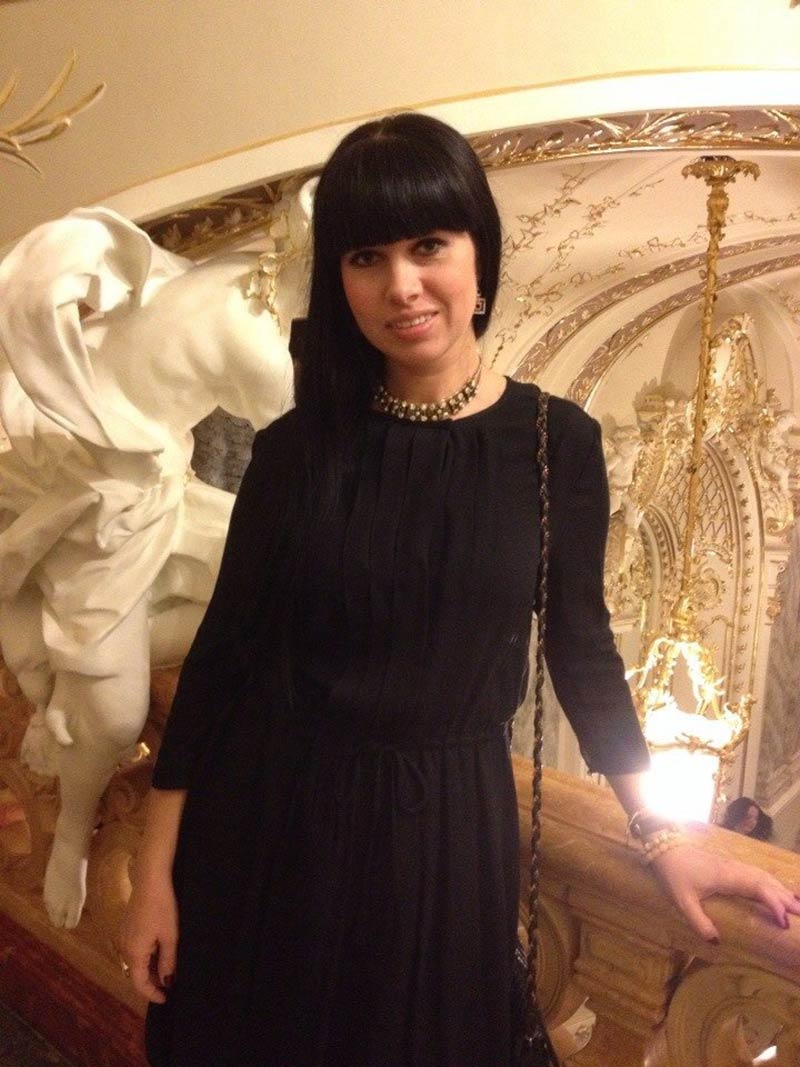 This theater is famous for its appearance on its own. Its facade is decorated with many sculptural groups: on both sides of the central entrance, sculptures of Tragedy and Comedy rise on pedestals (on the left side is “Hippolytus” - the tragedy of Euripides, on the right - an episode from “The Birds” - the comedy of Aristophanes), in the upper part of the facade - a sculptural group Muses patroness of art Melpomene. She is seated in a chariot drawn by four panthers. Along the perimeter of the building, you can see many busts of the creators of Russian art and literature: Glinka, Pushkin, Gogol, and Griboyedov. They also symbolize music, poetry, comedy, and drama. 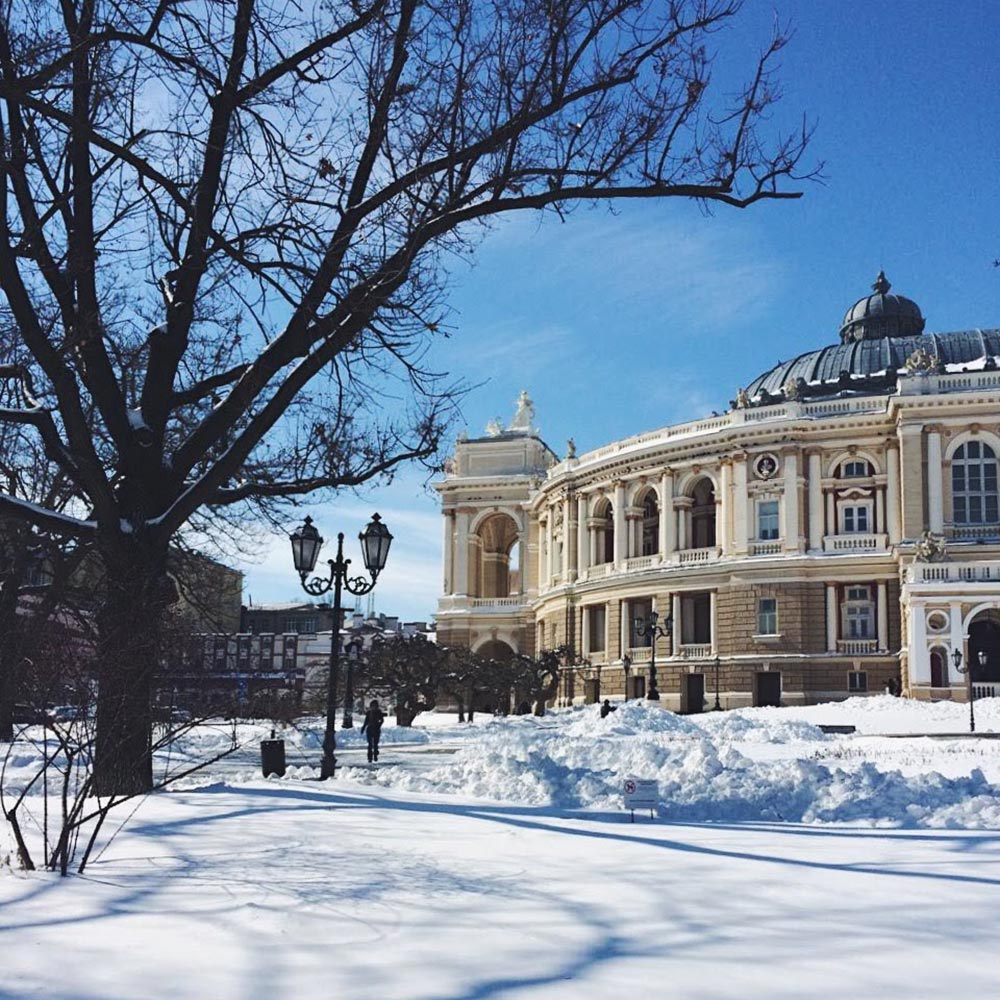 But the beauty of the Opera House does not end with the appearance. The auditorium, designed in the Rococo style (Louis the 16th style), captivates everyone present. All columns, arches, bas-reliefs, and other elements are in harmony with each other.

Abundant gilding goes well with beige, cream, and white ceilings and walls. The ceilings are decorated with beautiful paintings depicting scenes from Shakespeare's works. In the center of all this is a huge crystal chandelier, surrounded by mirrors which all are in gold frames, and with seats upholstered in red velvet.

The repertoire of the Odesa Opera House is very large and varied, but, like in all theaters, it has its favorite performances, which are always full of people: Il Trovatore, Carmen, Zaporozhets beyond the Danube, Natalka-Poltavka, Nutcracker, Sleeping Beauty.

The existence of the theater in the city of Odesa began from the first days of the city's foundation. The Opera & Ballet Theater is entitled to be called the elder among a great number of cultural institutions. Odesa strived for the right of building the theater in 1804, and in 1809 it was already built. On the 10th of February in 1810, the first performance took place - the Russian troupe by Fortunatov staged a one-act opera by Fralih A New Family and a vaudeville act A Consolating Widow.

Unfortunately, in 1873, the old opera building was burnt. And it was burnt completely. The restoration was out of the question. It was a tragedy, which was relented by one fortunate circumstance - nobody suffered from it. It was suggested to draw up a draft of a new city theater to Vienna architects Helmer & Fellner. Eleven years passed since the laying of the first brick into the foundation of the new theater building. And the theater opening took place on the 1st of October 1887.

There is a sculptural group over the front, portraying one of the muses - a patroness of art - Melpomene. She is sitting in the chariot, harnessed by the four furious panthers, which were subdued by her. A little bit lower there are sculptural groups from ancient mythology subjects. 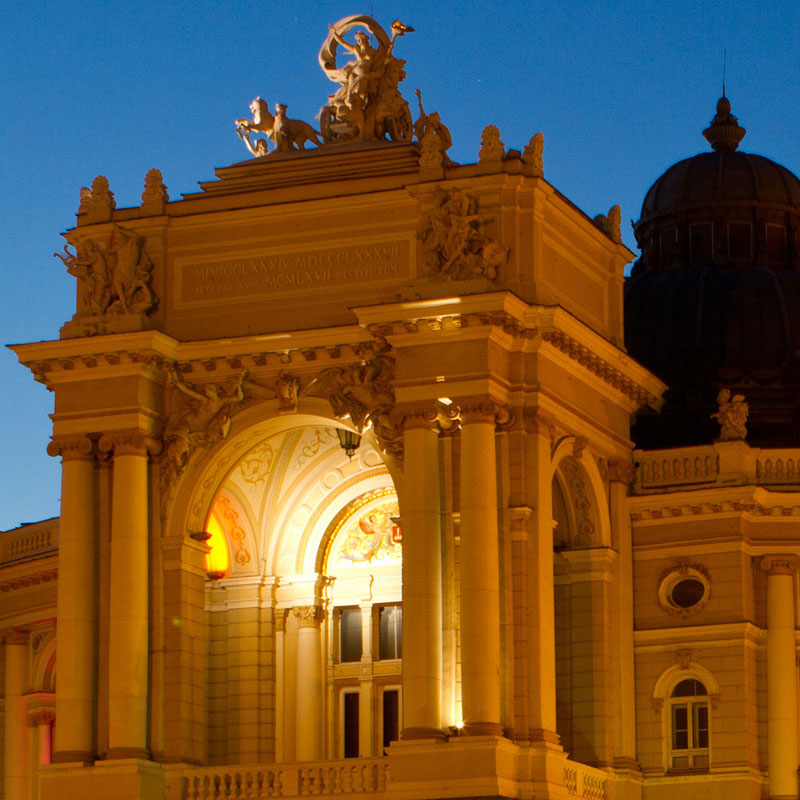 At the bottom, near the central entrance, on the high pedestals, two sculptural groups are set up, personifying Comedy and Tragedy: on the left - a fragment from the tragedy by Evripid "Ippolit", on the right is an episode from the comedy by Aristophane: The Birds.

Along the pediment of the building in the bays of the upper сircle the busts of the brilliant Russian artistic and literary creators Pushkin, Glinka, Griboyedov, and Gogol are placed. The most beautiful part of the building is its hall. Its architecture is maintained in the "rococo" style. It is luxuriously decorated by various molded ornaments, with the finest gilt. 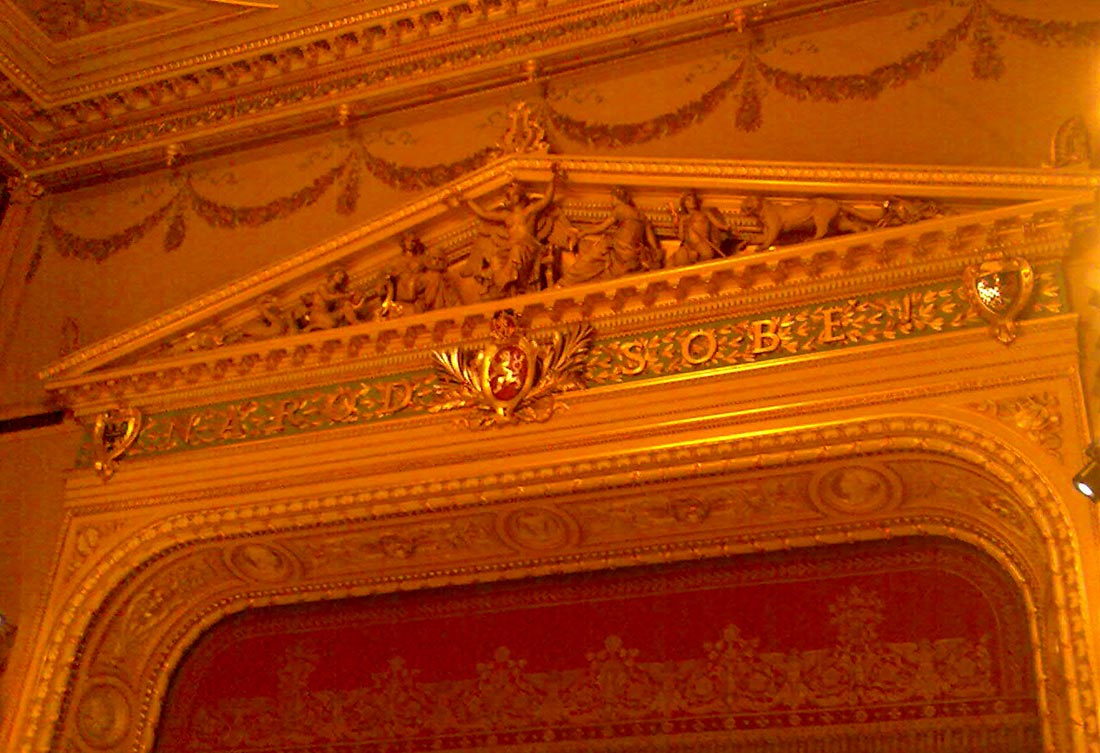 The ceiling is of special interest. Four pictures by Lefler in the form of a locket (medallion) are its basis. The scenes from the works of William Shakespeare: Hamlet, A Dream in the Summer Night, The Winter Fairytale, and As You Like It, are depicted on them. A big chandelier in the center of the ceiling strikes with its sparkling details. There are many different stucco moldings in the hall and in all the circles.

The molding in the circles is fulfilled with a special grace. Side lobbies and along staircases, lead to the seating boxes. All kinds of lamps, candelabrums, and bronze ornamental inlays are originally and inventively made. Perhaps, in any of the theaters of the world, there is no such tastefully made curtain, outlined by the prominent theatrical painter - Golovin. The area of the stage is 500 sq.m. The unique acoustics allows even a whisper from the stage to be heard in any part of the hall. 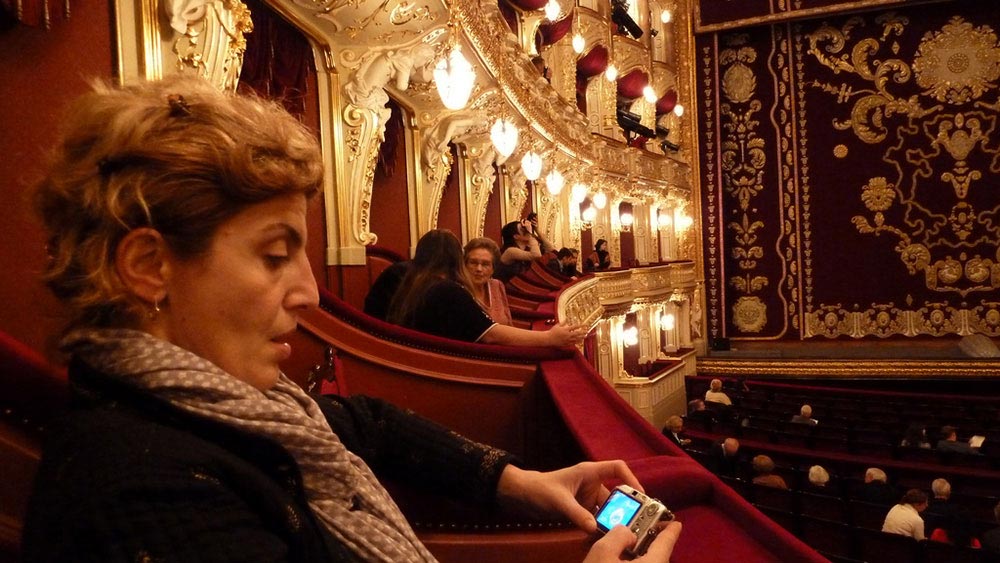 The theater itself is interesting not only by the architecture but by its rich creative biography. The great merit in the development of musical culture in the south of our country belongs, to this theater. Tchaikovsky, Rimsky-Korsakov, Rachmaninoff, Ezhen Izai, Pablo Sarasate, and others performed their works. There appeared on the stage the actors, who glorified the art, and the great singers: Fyodor Shalyapin, Solomiya Grushelnitskaya, Antonina Nezhdanova, Leonid Sobinov, Tito Ruffo, Battistini, Jeraldoni sang here, Anna Pavlova, the first world ballet-dancer, has been dancing here.

In 1926 the theater was awarded the title of "Academic". The theater ballet group consisted of 50 people. Among them such honored ballet dancers of Ukraine as Andrey Musorin and Yelena Kamenskih - the participants of the Farewell Tour of Rudolf Nuriyev, and others.

This shoe-shaped auditorium accommodates some 1,500 spectators, and if you are lucky enough on your visit to Odesa, you will count yourself amongst the many people over the centuries who have enjoyed the splendor of this magnificent opera theater.