Short on time? Take a walk with us!

Like many people visiting Ukraine, sometimes there is only time for a day or two per city. So we've condensed the highlights of Odesa here for you to enjoy, to get the most out of your visit, starting at the world-famous Odesa Opera and Ballet Theater. 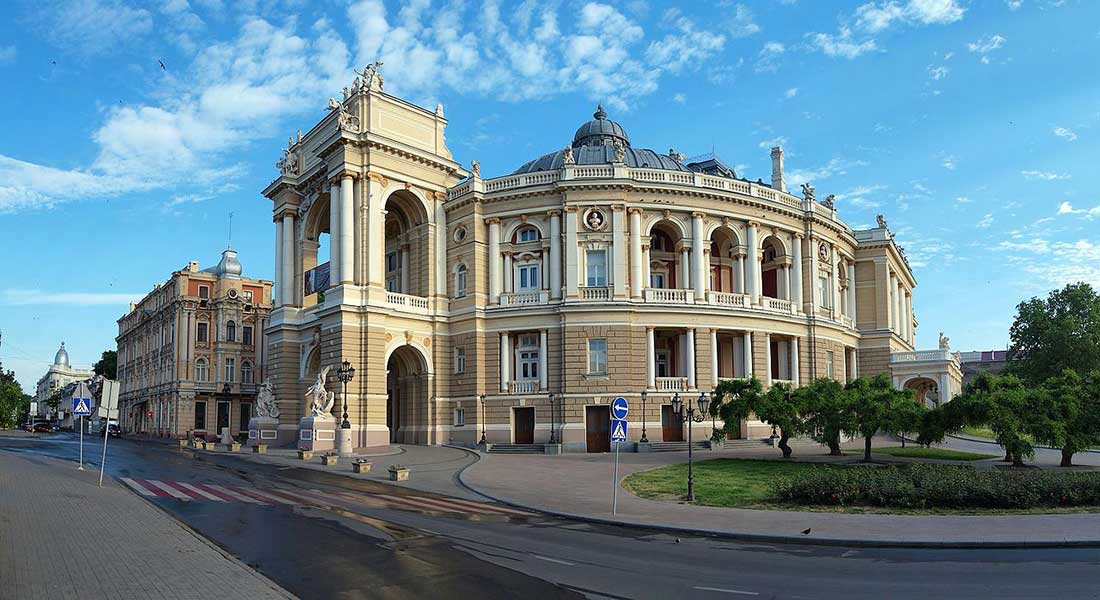 The Odesa Opera and Ballet House is among Ukraine's greatest architectural monuments and is one of the most beautiful theaters in the world. The theatre has an Italian baroque facade, with a Renaissance–style entrance and stone figures depicting scenes from Aristophanes and Euripides. There are also allegorical stone sculptures of the Goddess of Tragedy, in a chariot drawn by four panthers; Orpheus, charming the centaur with his music; cherubs playing, singing, and dancing teaching a young girl; there are busts of Pushkin, Gogol, Griboyedov and Glinka, representing poetry, comedy, drama, and music. 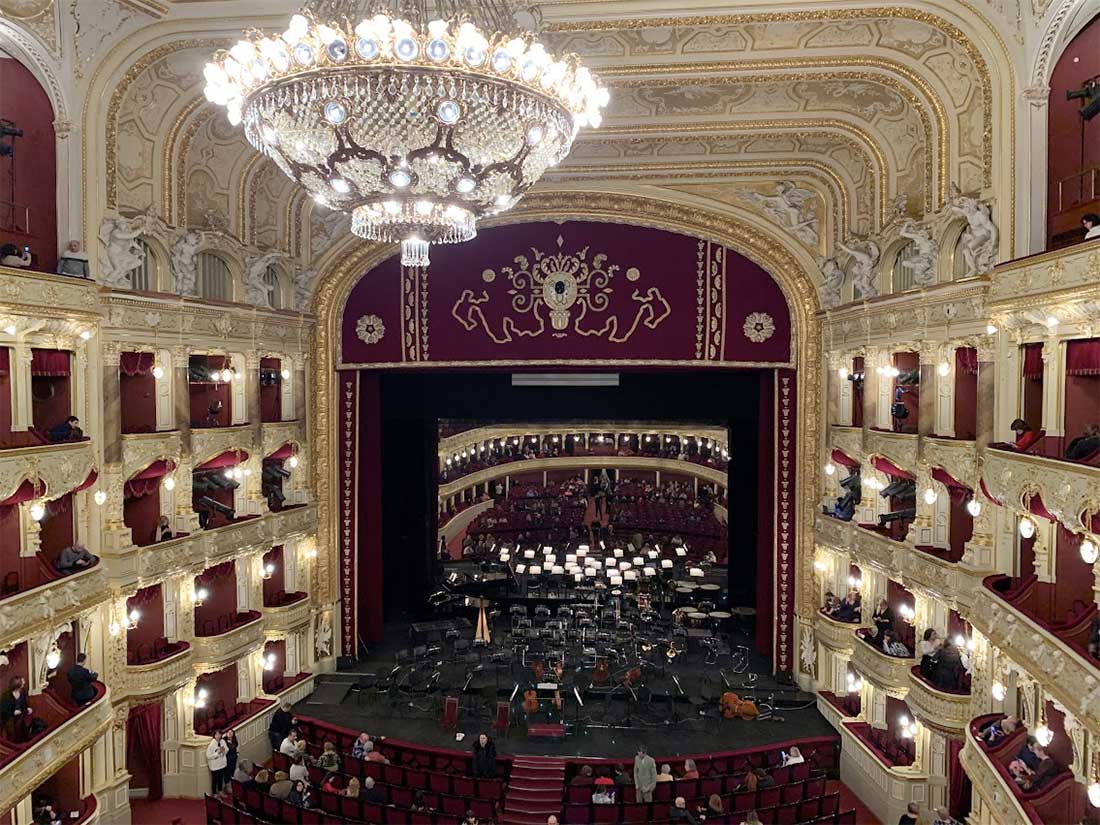 The auditorium is in the style of Louis XVI, with a chandelier that weights almost two and a half tons, surrounded on the ceiling by frescoes depicting scenes from Twelfth Night, A Midsummer Night's Dream, A Winter's Tale and As You Like It. The architects, remembering a fire in a Viennese theater, provided the foyer with twenty-four exits. We strongly recommend every visitor take a tour or visit a show at this magnificent structure. 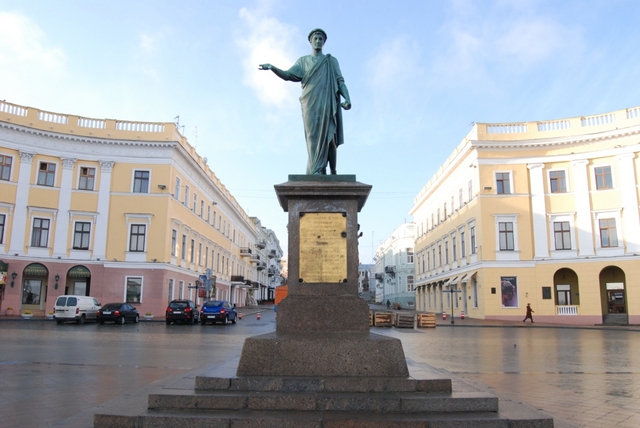 After the opera house, take a stroll towards Potemkin Steps, but prior to taking a walk down towards the port note the central statue of Duke Richelieu, the first governor of Odesa. Visiting Russia in 1795, Richelieu was appointed lieutenant colonel of the Cuirassiers of St. George, and later Tsar Alexander I appointed him governor of Odesa and governor-general of New Russia, the area between the Dniester River and the Caucasus. After cleaning up a corrupt administration, Richelieu transformed the Black Sea village of Odesa into a modern city. He constructed port facilities and encouraged agriculture and commerce. 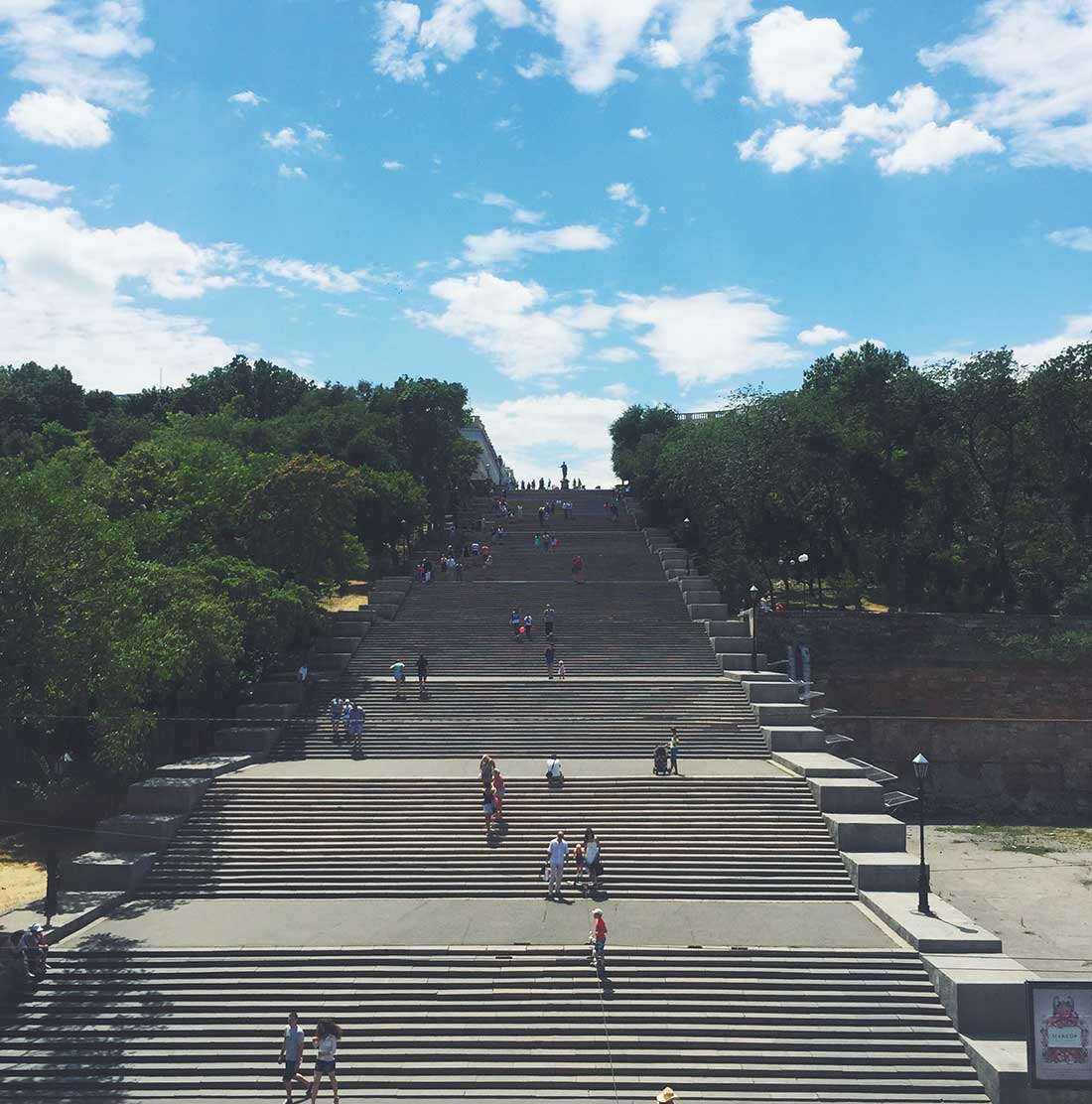 After a Kodak moment with Duke, take a stroll towards Potemkin Steps (now called the Prymorskyi Steps); the legendary staircase which saw a 1905 battle between mutinying sailors and forces loyal to the Czar. The clash was immortalized in Eisenstein’s 1925 silent film, Battleship Potemkin.

Some obscure facts about the steps as a structure is the fact that you can't see the steps at all when standing atop - all you can see are a few landings. However, when you stand below the steps, all you can see are the steps. It is an optical illusion. The steps took four years to build and were completed in 1841. Take a stroll down the steps and venture across the street to the long pier to catch a boat cruise, or hike back up for the best workout around. Too tired to walk up? Take the funicular passenger lift alongside the stairs.

Often, especially around the days of the Odesa International Film Festival, the steps become seating for the whole city to watch movies on a giant screen, a great time to feel the vibe of the space, if you can find space to sit that is. 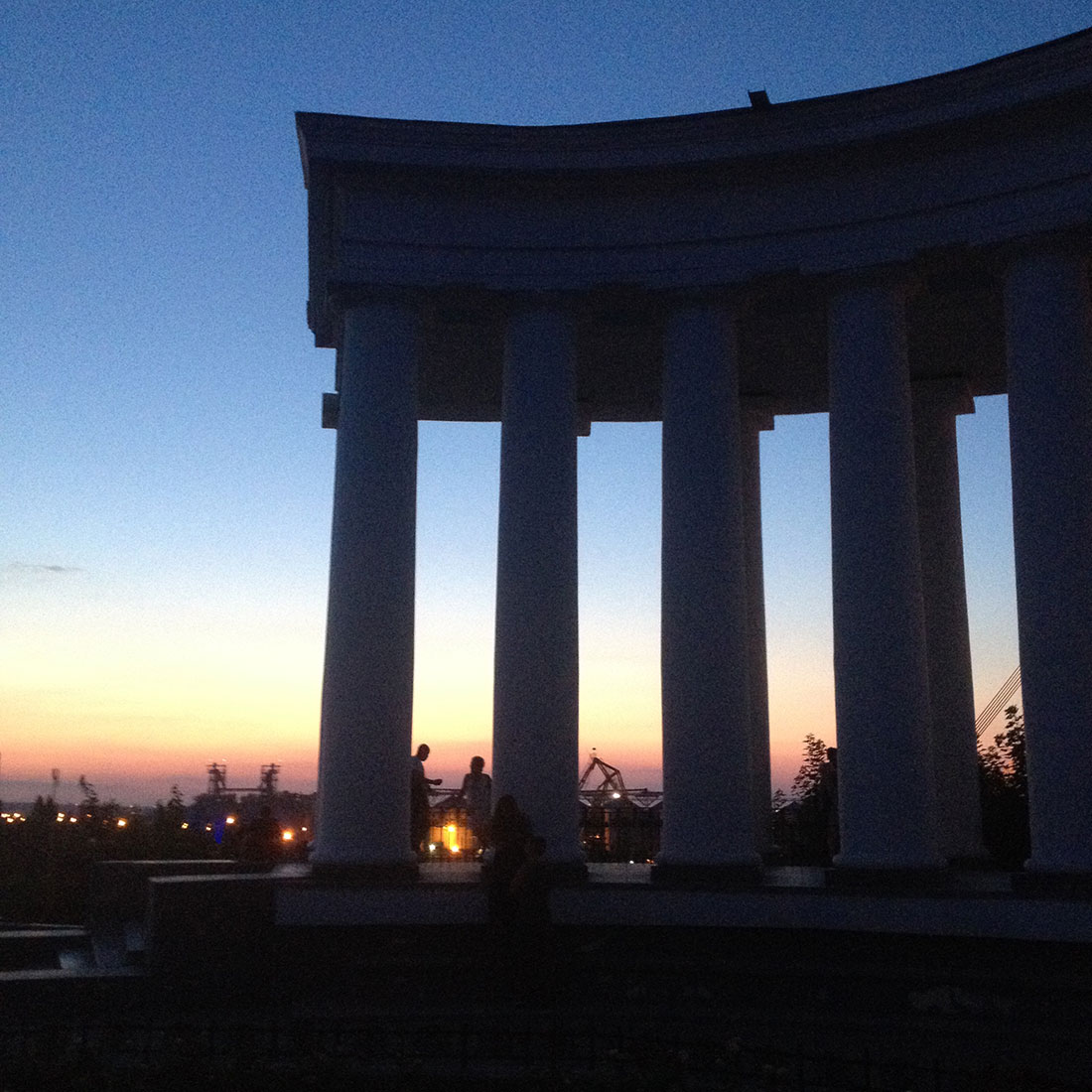 After an intense workout consisting of climbing the Potemkin Steps, relax by taking a leisurely stroll through the shady Prymorskyi Boulevard. This boulevard is located directly atop Potemkin Steps. It has often been used as a backdrop for numerous Soviet-made movies. And why not, since its wide cobblestone streets and tall trees provide a scenery that rivals Paris. This boulevard is one of the most picturesque areas in Odesa. On one end is the famous Colonnade of Vorontsov Palace (image, above), and on the other end is the City Hall (image, below). 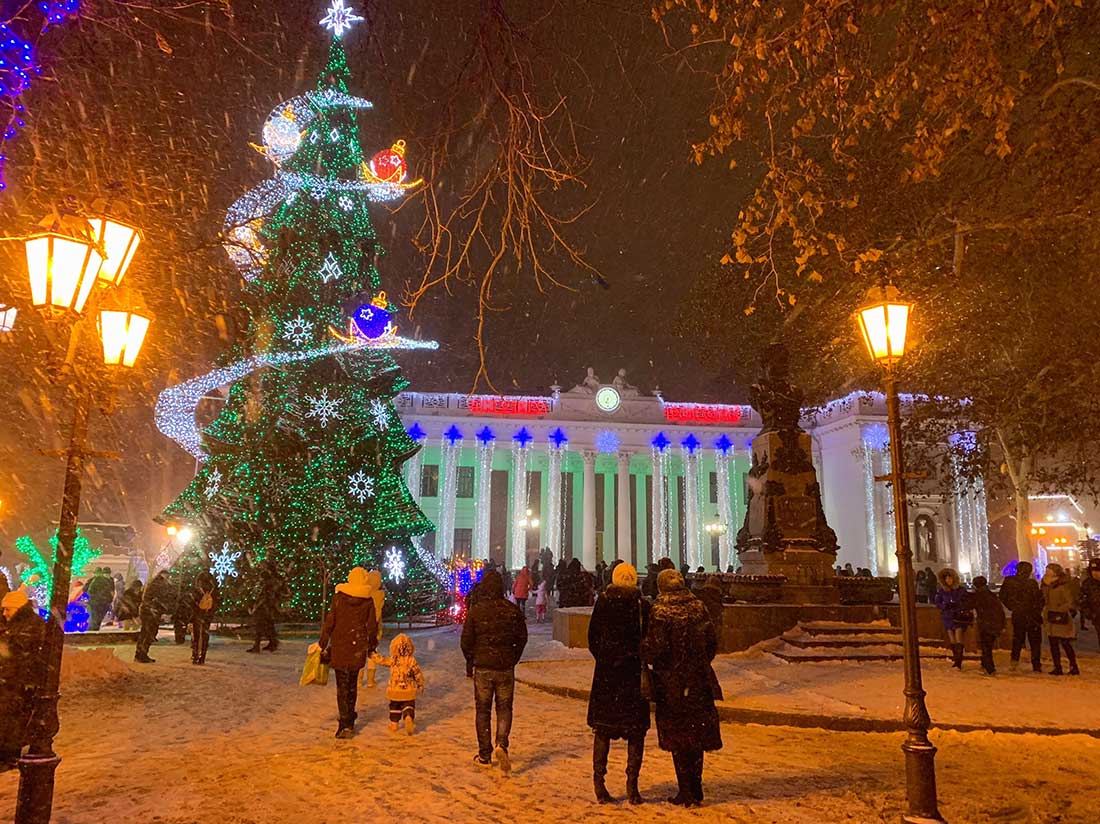 Strolling south on Prymorskyi boulevard (about 200 meters) will bring you to a historic building which is currently Odesa's City Hall. It is located in front of a monument to Alexander Pushkin, which is considered by many to be one of the world's greatest poets. Pushkin spent thirteen months in Odesa, naturally falling in love with the city's charm. 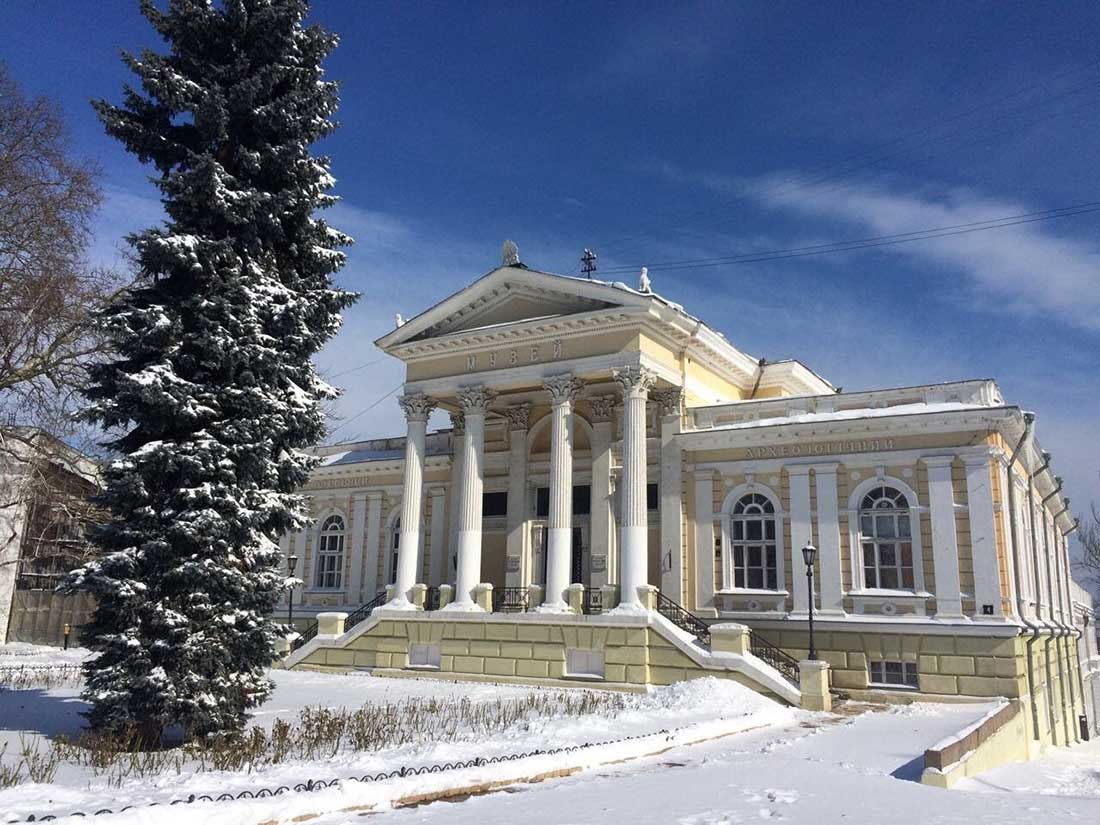 After City Hall, take a right and notice a statue of Laocoön and His Sons, which marks the entrance to Odesa's Archaeological Museum. One of the oldest in Ukraine, it was founded in 1825. Its development was promoted by the Odesa Society of Antiquity and History, which had the right to carry out excavations in the Northern Black Sea Region.

There are more than 160,000 exhibits. They are the basis of one of the largest collections of information sources about the ancient history of the Northern Black Sea region. The museum possesses a rich collection of archaeological relics of primitive and classical culture, and relics of ancient Egypt, Ancient Greece, and Rome, besides there is a large and valuable collection of coins and medals. 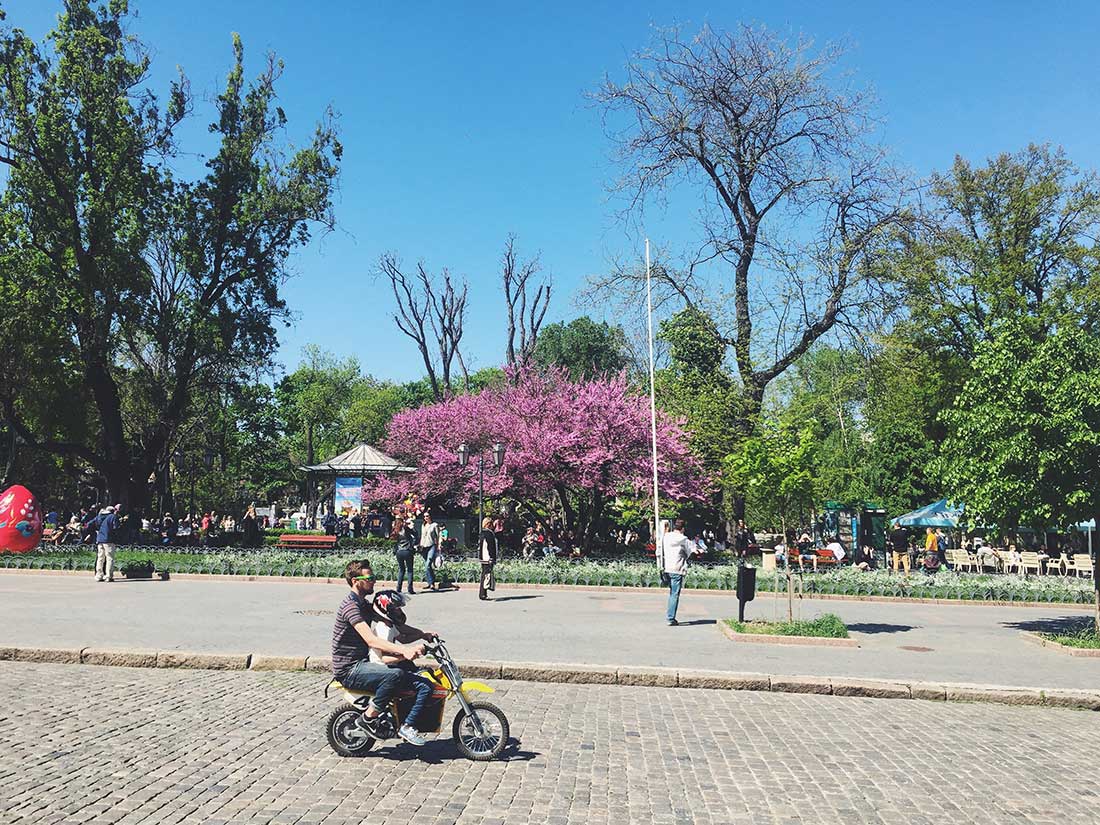 After examining all of 160,000 exhibits at the Archeological Museum, we walk outside to find ourselves on the famed Derybasivska Street. This famous street has been featured in thousands of books, films, and songs, and remains one of the most celebrated in Ukraine. Odessites are passionate about Derybasivska, and a trip downtown cannot be complete without at least an hour spent strolling here or people-watching from one of its many cozy outdoor and indoor cafes. Each year Deribasovksaya gets more beautiful and of course, more crowded with tourists. 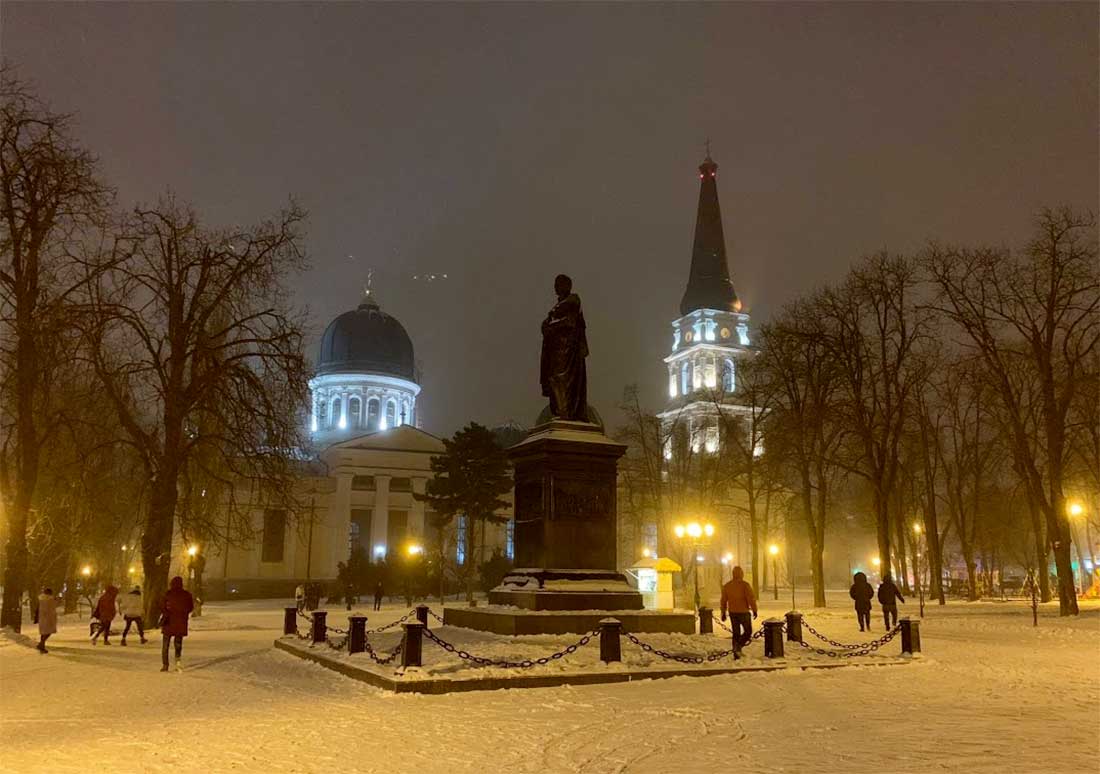 After about a leisurely walk down Derybasivska Street, at one end, you will see Sobornaya square which houses the impressive-looking Spaso-Preobrazhensky Cathedral (above). 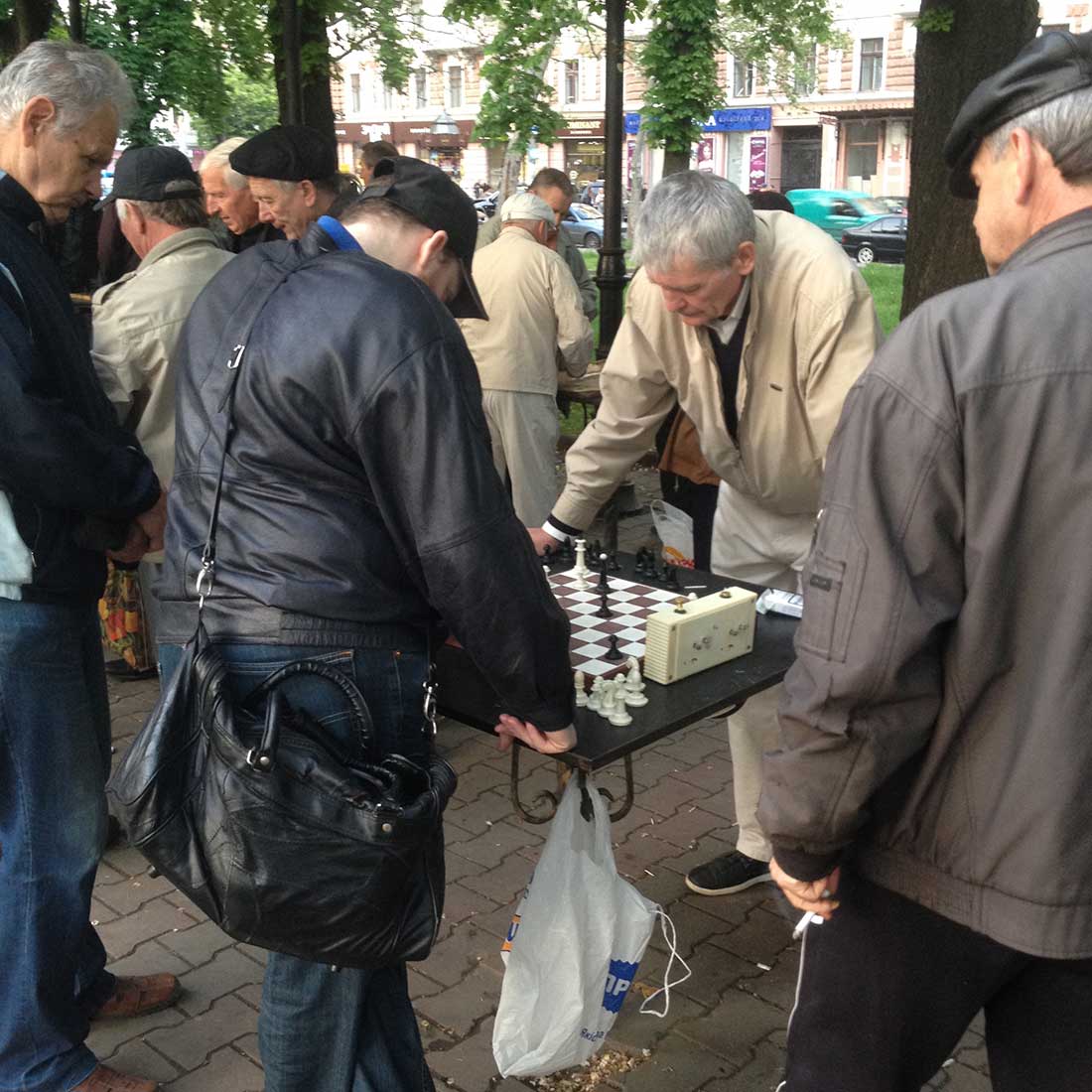 Sobornaya Square is a pleasant location to take in the scenery while sitting on a bench, people watch the locals play competitive chess. Or, do a little shopping across the street in the splendid architecture of the Odesa Passage, a luxurious gallery with a glass roof and an elegant interior. It is one of the most beautiful patios in the city with various boutiques. A great mixture of shops is located in an elegant building in this city center mall. Even if you have no desire to shop, it is worth seeing this work of art. 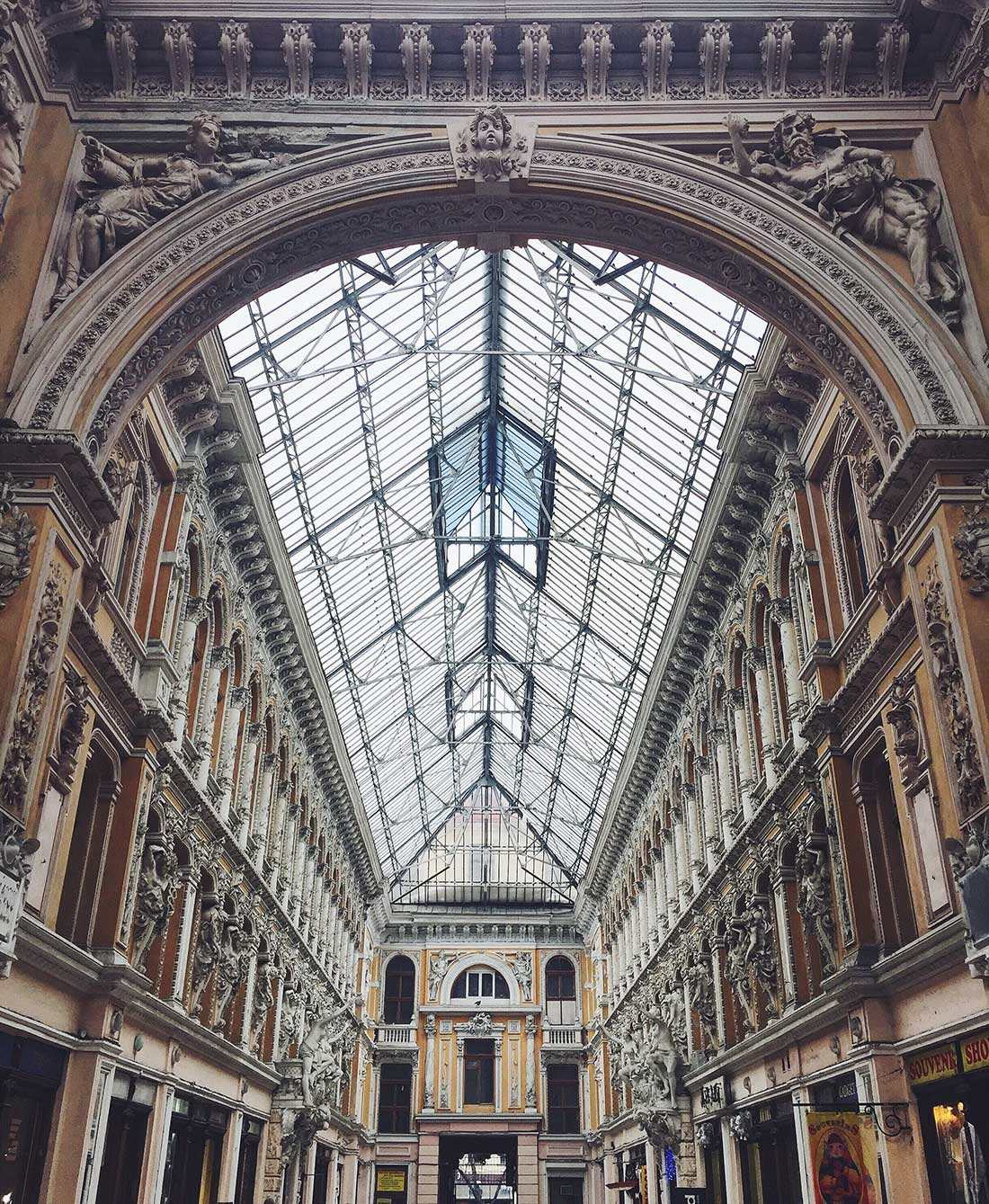 Not a single city in Ukraine and in all likelihood in all of the former USSR can boast of such an abundance of monuments, memorial plaques, and other “street furniture” per capita as can Odesa. While the best way to see these is to aimlessly wander around the city, a few are of greater fame and importance and thus are worth pointing out. 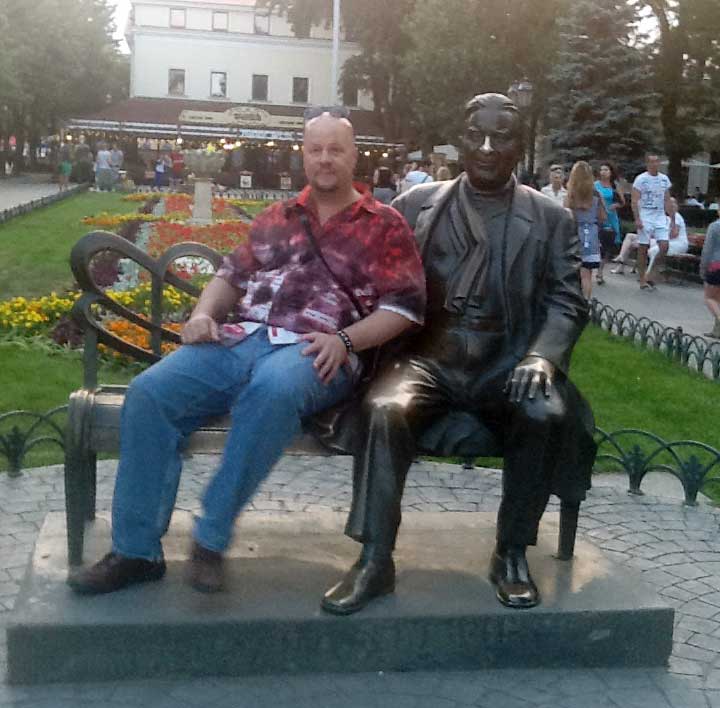 First one is a monument of Leonid Utesov (above), a famous Odesa jazz singer and songwriter. Eternally he sits on a bench located directly next to Gorsad (City Garden) on Derybasivska Street. Another interesting exhibit is located directly behind the Port terminal, adjacent to the marina. Here, you won't be able to miss this charming sculpture of bronze to the rounded shapes under the name “The Golden Child” by sculptor Ernst Neizvestny. 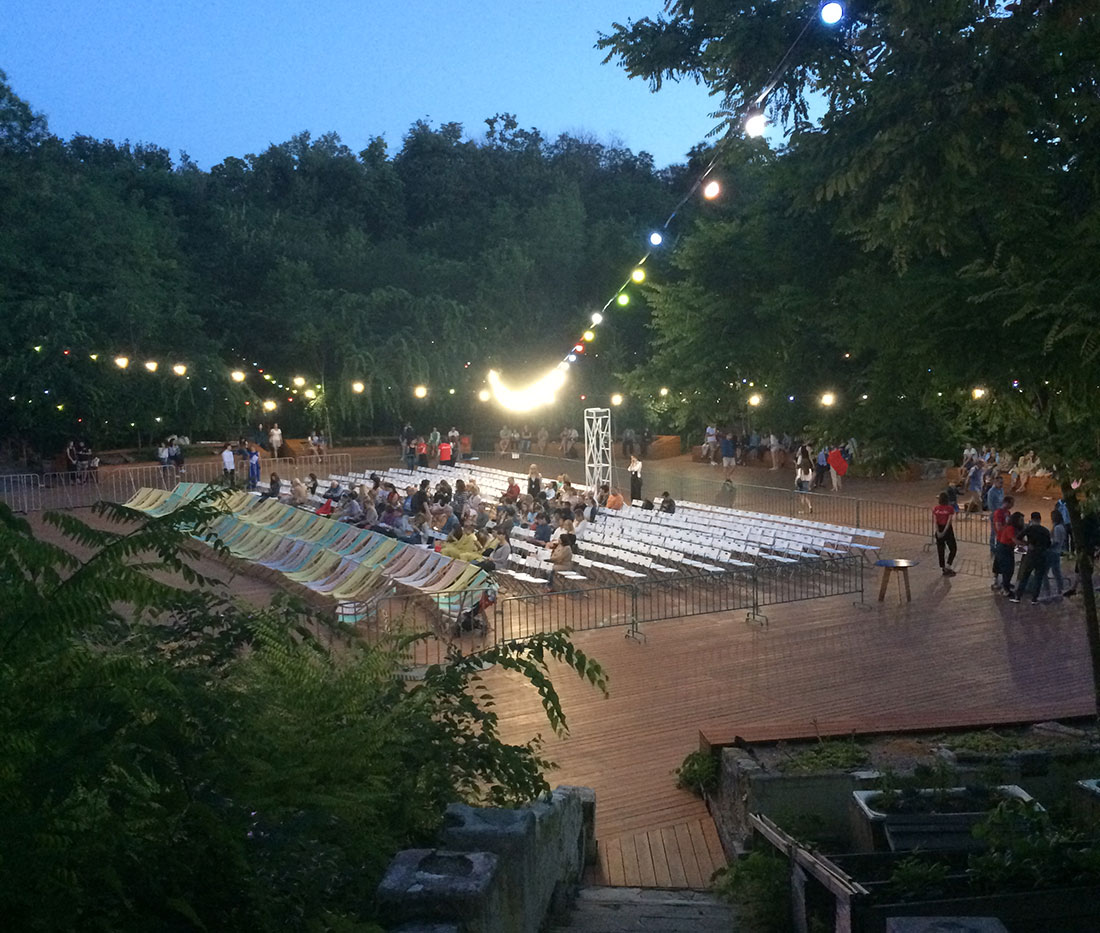 After you are finished with Derybasivska Street (which can take a while) and monument hunting, you can either stroll or take a cab to Park Shevchenko. Walking would take approximately 15 minutes while a cab ride will get you there in less than 5 minutes.

One could easily spend hours exploring, there is Chernomorets Stadium, a wonderful old outdoor theater converted into a hipster park with food kiosks and regular events and pop-up markets (see above) and of course, the statue at the entrance to commemorate the great poet whom the park is named after, and behind the stadium, a still-standing oak tree planted by Tsar Alexander II of Russia himself, when he visited Odesa during the park's opening ceremony. There is also an obelisk commemorating his visit. 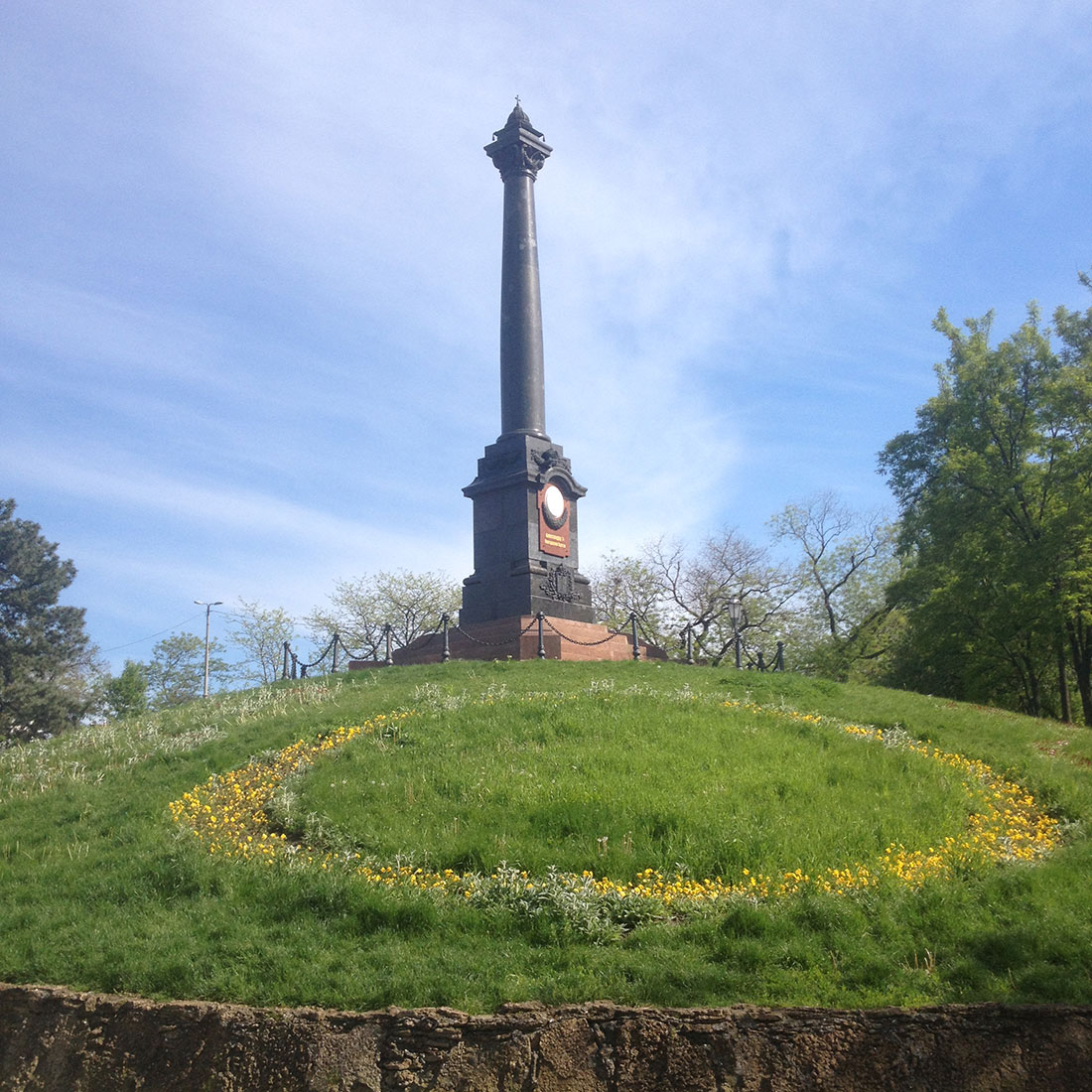 The park is also home to the World War II Memorial called the Alley of Glory, constructed in 1961. The park is large, with 225 acres on a plateau that overlooks the Black Sea. 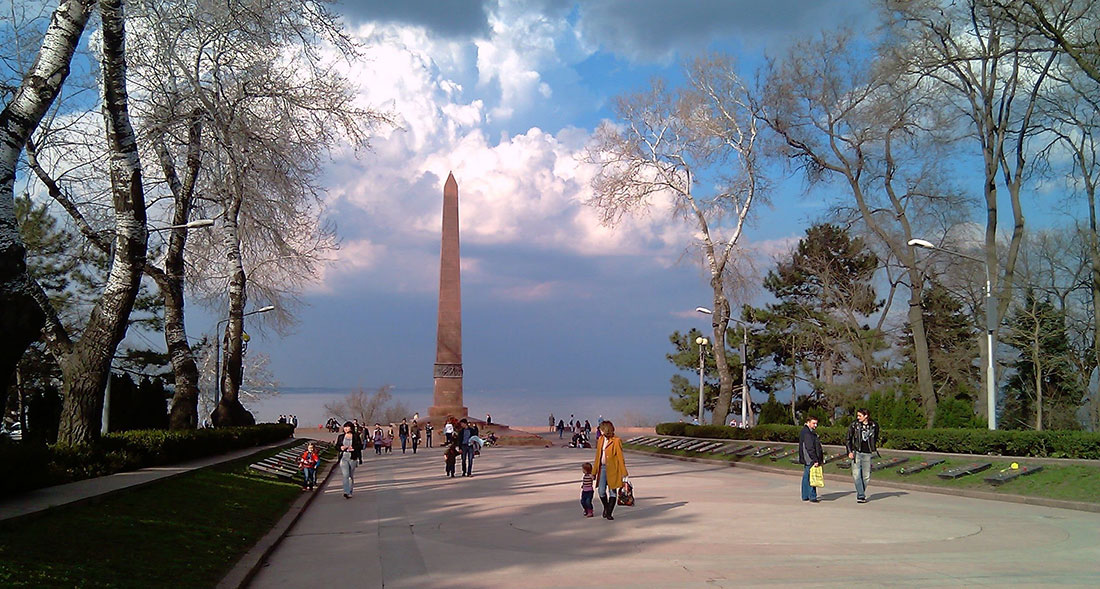