Arcadia (Arkadia), was a town and city-state of ancient Crete in Greece. It disputed the claims of Mount Ida to be the birthplace of Zeus, and with one visit you will understand that lighting happens where the water meets the land, and the magic in Odesa happens in this popular beach zone along the coast of the Black Sea. Even back in Tsarist times, the beaches of Arcadia brought in visitors from around the world, and during WW2, it was used by smugglers to bring in contraband and avoid the authorities... 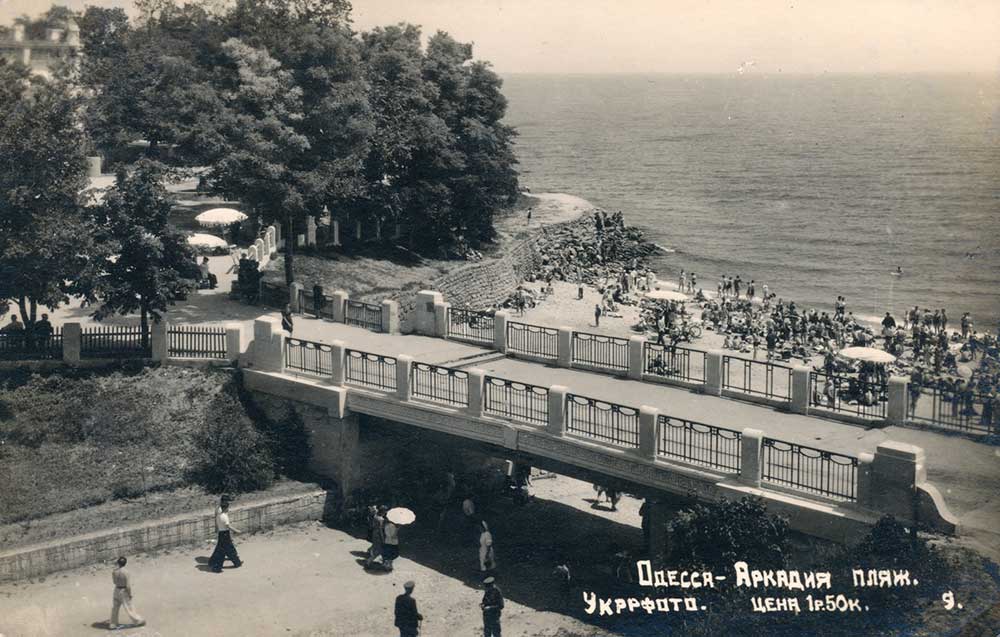 Arcadia back in the day

Arcadia reborn in the new millennium...

Fast forward to the 2000s, and this place was looking a bit run down, with the last major refit taking place in the Soviet era, and then capitalism was laid over it in a chaotic fashion. So some local entrepreneurs undertook the efforts to reimagine the famed alleyway, and the new Arcadia was born, now more popular than ever! 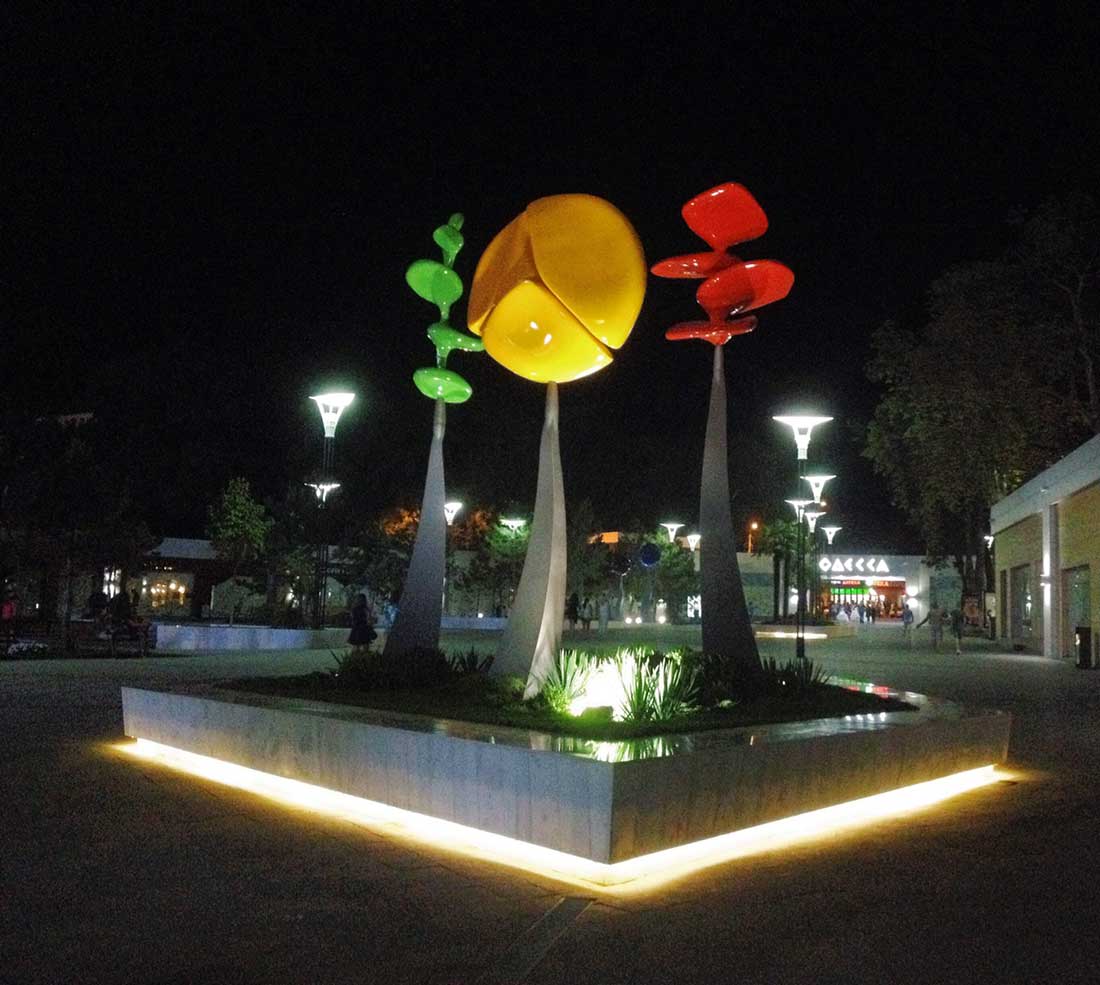 Arcadia is translated from Greek as "gate to paradise"; so through these very gates now you can find out everything "outside the city". Yes, yes, this is where you can relax, on a sort of Ukrainian "French Riviera", where the most luxurious nightclubs, bars, restaurants, elite beaches and hotels are located. Here you will be able to meet old inhabitants of Odesa, telling "before". Hear the real Odesa language, laugh at a joke and come to the conclusion that Odesa has not lost its color.

No trip to Odesa is complete without a visit to Arcadia. To get to Arcadia you will need to hail a cab and from the center of the city, a ride that should take no more than 15 minutes, or you can catch the 5 tram (which runs along Pryvoz market and the main train station) which has a terminal here. If you're feeling up for the adventure, you can also catch the 198 or 168 marshrutkas (minibus taxis) for a fraction of the price of a taxi. 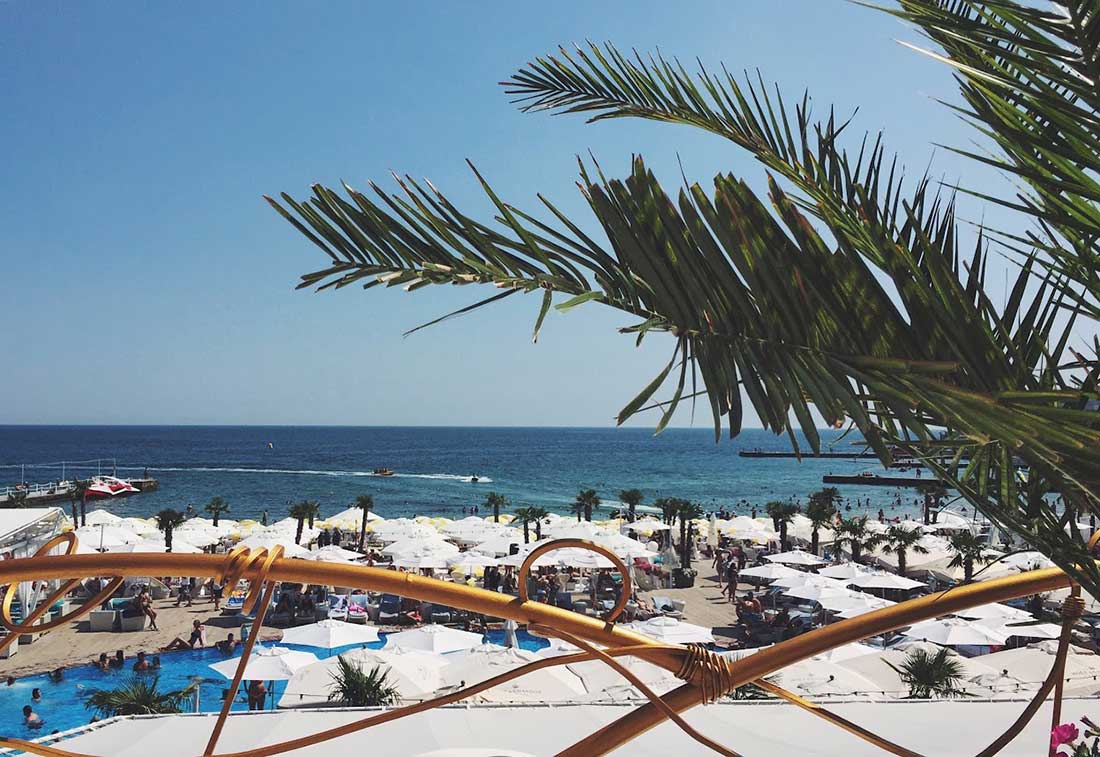 Arcadia is the jewel of Odesa's nightlife and beach activities in the summer months, and a popular walking venue all year round. It is one nonstop party, with restaurants, bars, cafés, clubs, and of course, a lovely stretch of sand and sea. Above the beach, the patios of dozens of themed restaurants, bars, and clubs provide shady spots from which to people-watch and take in the scenery. 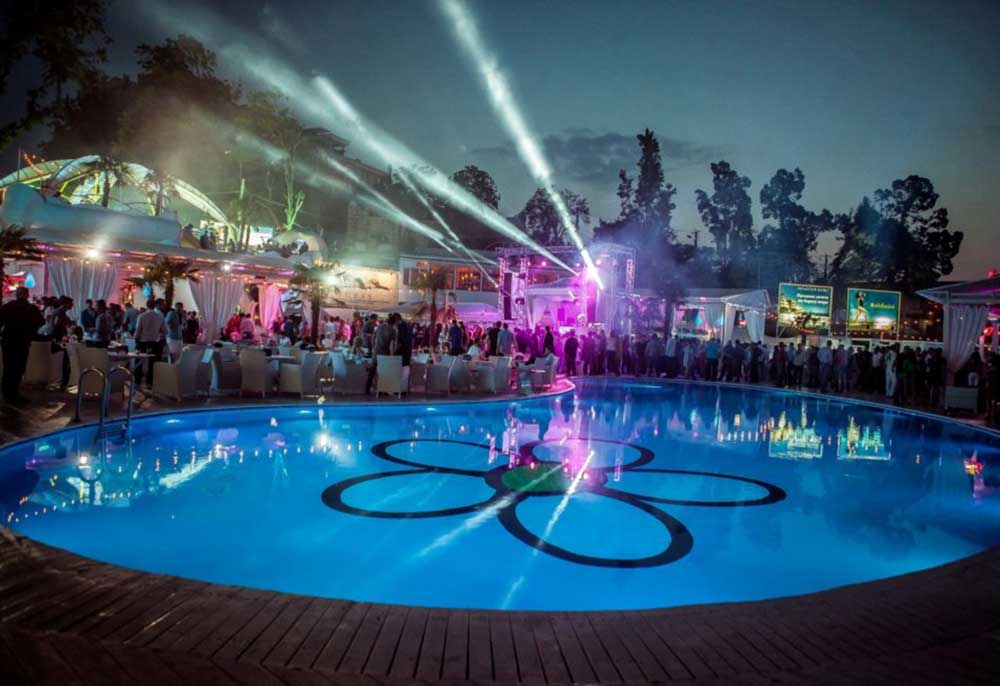 At night, Ibiza turns into a nightclub

Sample delicious local seafood or various ethnic cuisines while also enjoying ice-cold beer or cocktails. The best tables are often reserved, but good service and smiles are not uncommon here. After the sun has set the music takes over and the Arkadia strip comes alive with dancing and nightlife, becoming what some call the biggest party in Ukraine. 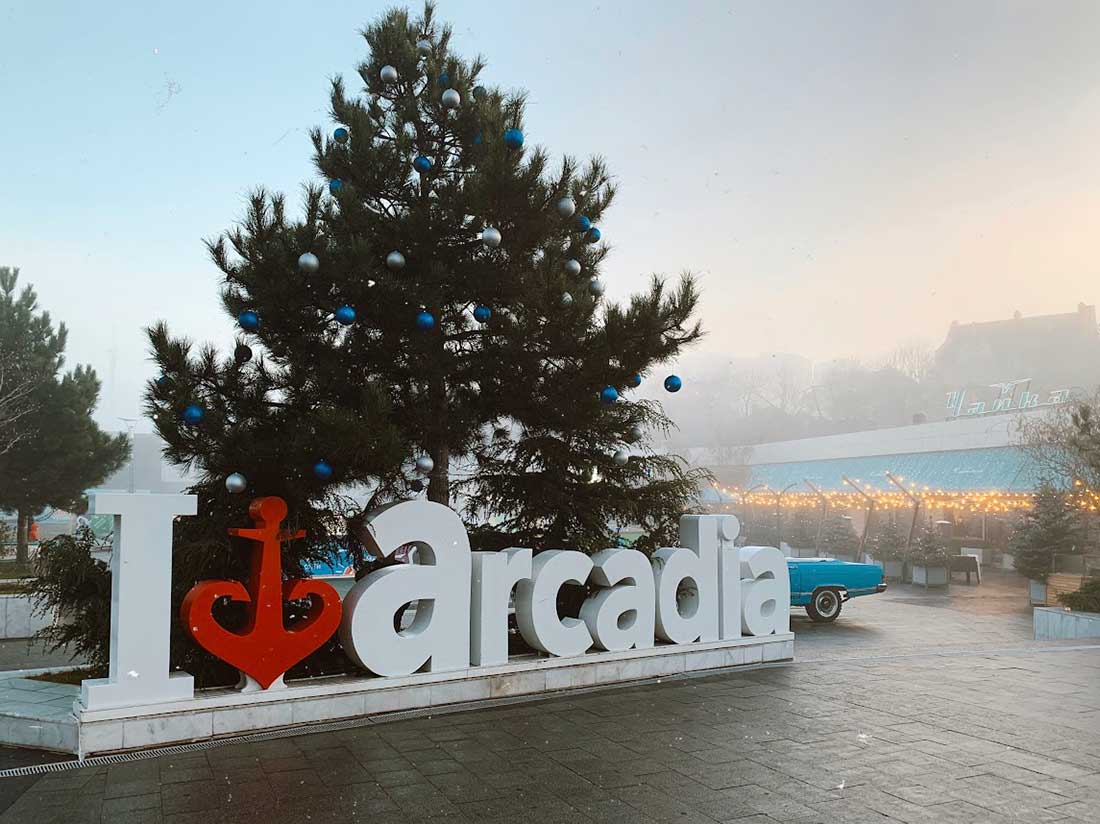 Arcadia is popular in every season!

And the dining/drinking options are bountiful here. Near the entrance is The Roastery by Odesa, a trendy eatery, as well as Benedikt, a Belgian-style breakfast joint, and the big fountain which sits in front of two outdoor dining options; Chaika (Seagull) with it's famous photo spot, a convertible Soviet "Chaika" car parked in front, and Tradicia, a great option for family dining (image, below). 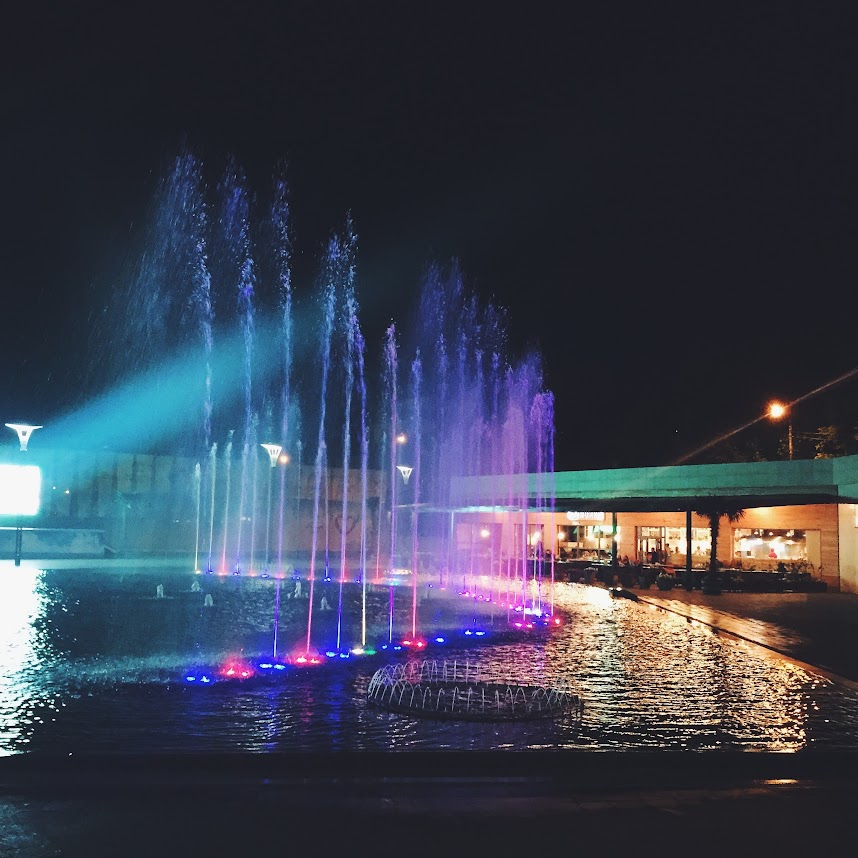 There are also options for meat lovers, like Mangal Meat House, which often has live music, and Nash, a Ukrainian themed restaurant closer to the sea. For those wanting lighter/faster fare, Horbushka offers awesome Italian-style sandwiches on their freshly-baked signature bread, Chin Chin, Chi Wok and China Wok restaurants offer Asian fare, or simply get some pizza, hot dogs, or waffle sandwiches and just walk around! 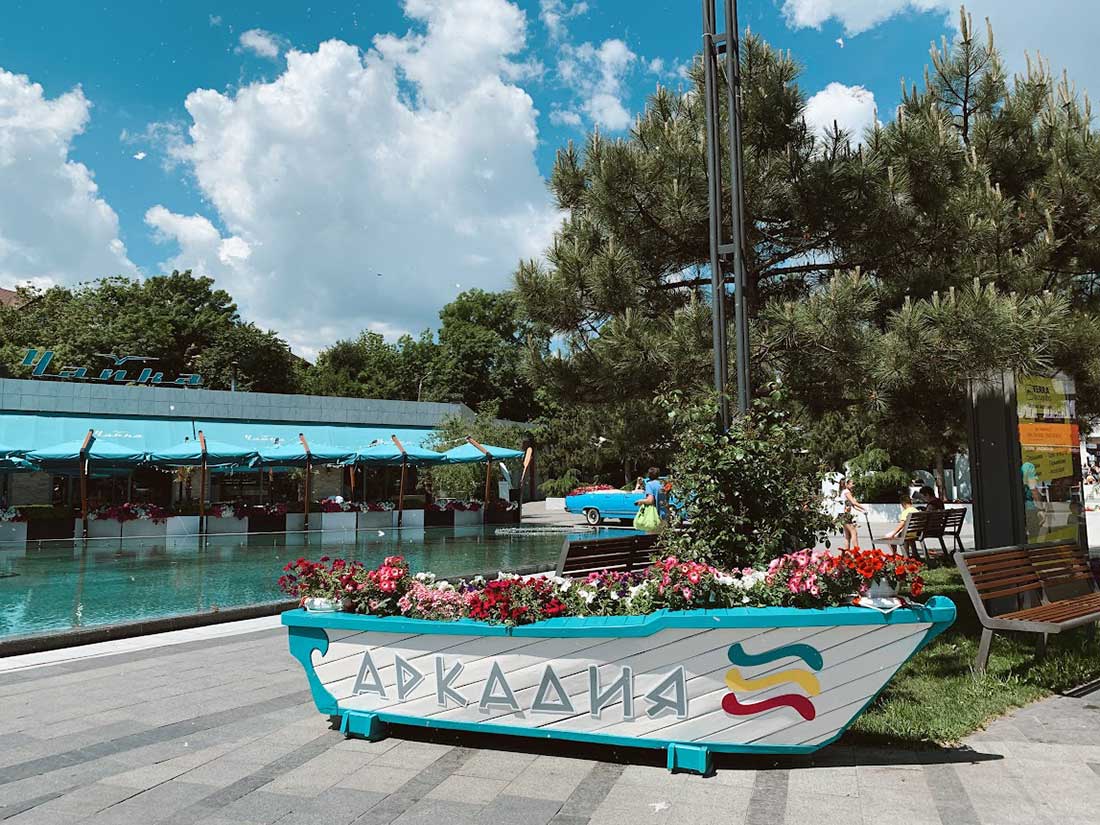 Arriving at the entrance of Arcadia, you enter a portal to a world of fun! The entry area has a smaller fountain, then you walk further past the big fountain, which in the evenings has a light and music show that is very popular to watch and enjoy. Then the main alley begins, full of flowers and greenery, and walking towards the sea, you will pass many shops and dining options, so here is a great time to grab a beverage at Odesa's famous Merry Berry Cafe for your walk onwards. 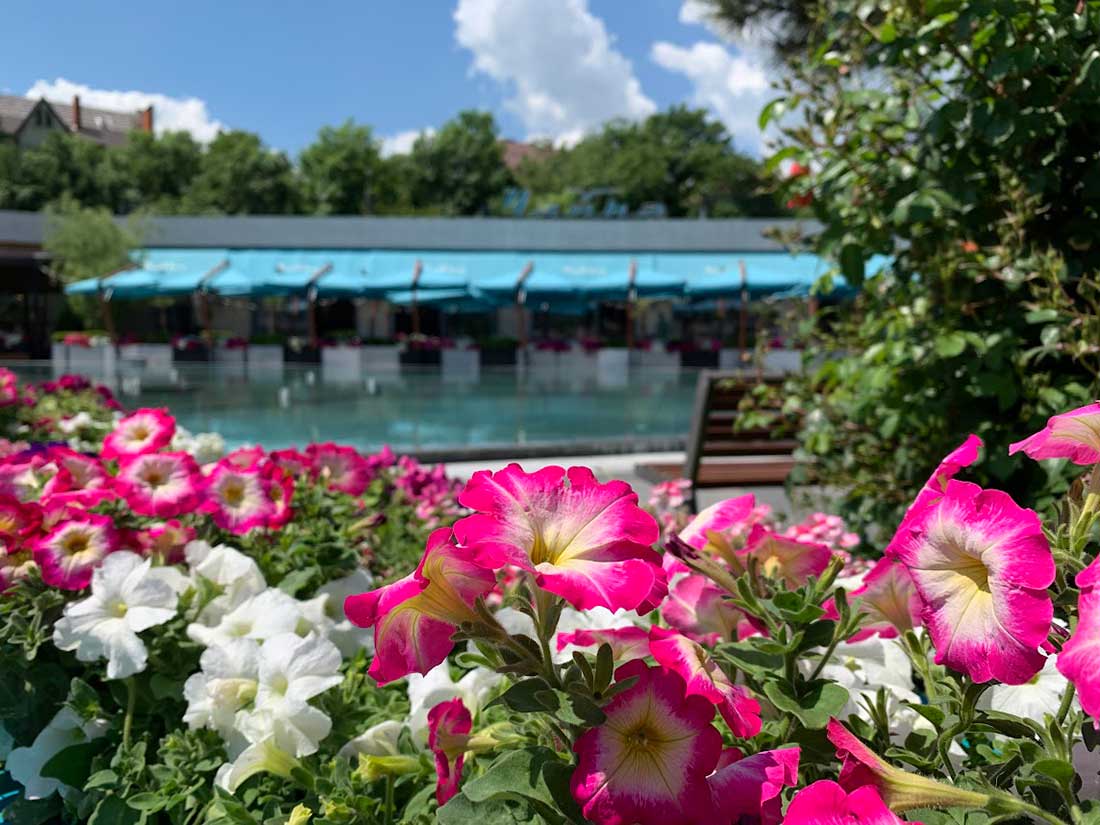 Not too much further down is a public toilet (small fee at the entrance) and then the amusement park area begins, with rides, games, bumper cars, a reverse bungee jump, a haunted house, and the "Bomber", an insane giant rotating ride with a great view.

On the right is Aquapark Hawaii, very popular in the warm summer months when the rides and pools fill up with happy kids and the sun lounges host relaxing parents bathing in the sun. The waterslide rides are the best in town! 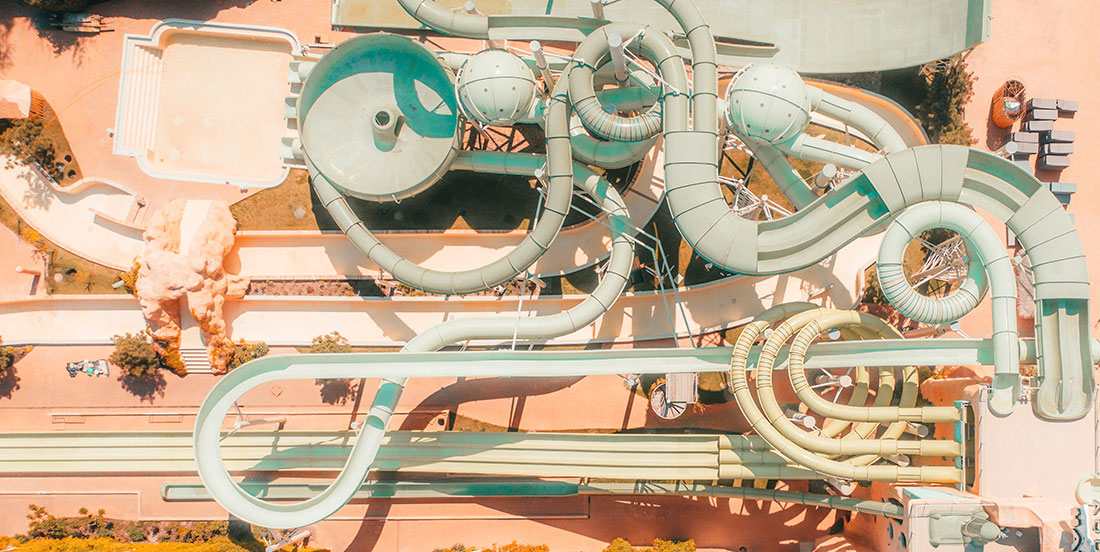 The Aquapark Hawaii from above, right before the grand opening (Photo by Geio Tischler)

Directly at the bottom of the alley is the world-famous Ibiza Beach Club of Odesa, which during the day is a great place to lounge in the sun on one of their rental lounges and swim in the freshwater swimming pools. On the upper levels, there is a cafe with free entry, but the rest of the complex has a cover charge. Ibiza is a popular place to chill, down on the sand you can rent a lounge chair and umbrella without an entry fee. At night, the space turns into a nightclub, with famous deejays and bands from around the world performing. It can get quite wild! 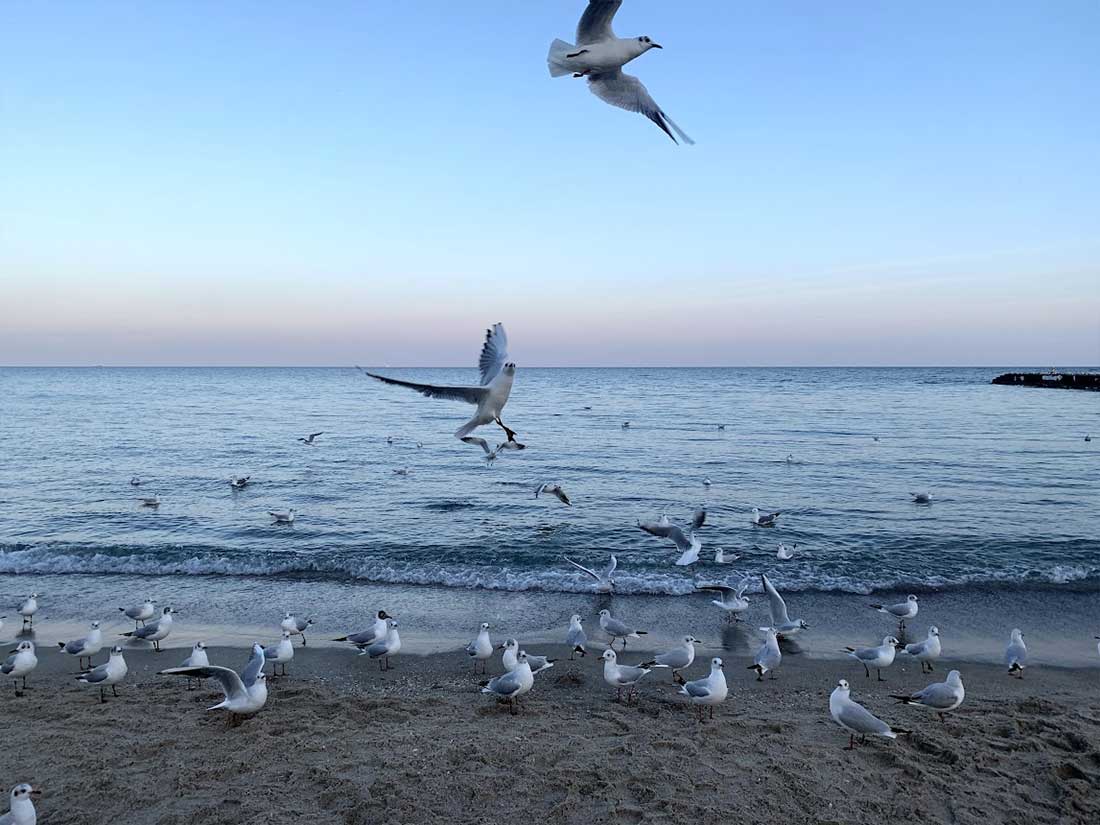 The bottom of the alley, going left

So now you're at a crossroads, you can head left, or right. To the left is Itaka Beach Club, very similar to Ibiza, with two small beaches on each side open to the public for no charge, a great place to take in the sea or feed the birds (above). There is the old alley past there, with more dining options, mainly Turkish food and karaoke joints, but there is also a newly opened KFC restaurant with a patio dining overlooking the sea right before you reach Itaka. It doesn't matter what time of day or night, Arcadia is magical around the clock;

Sunset is always a magical time to visit!

There is also Red Line Beach Club, another venue similar to Itaka and Ibiza, and has its own hotel. There are further down the walkway trampolines for the kids, a basketball court, and bike rentals (keep alert, bikes and skaters are everywhere on the walkway and health walk). Of note, there is also the wonderful Lviv-style rib joint Rybernia a must visit for some tasty BBQ ribs and beer.

From here, the alleyway starts to merge into the Health Walk, which winds along the coast all the way to Langeron Beach in the city center, a very nice long walk in the sea air any time of year, day or night. 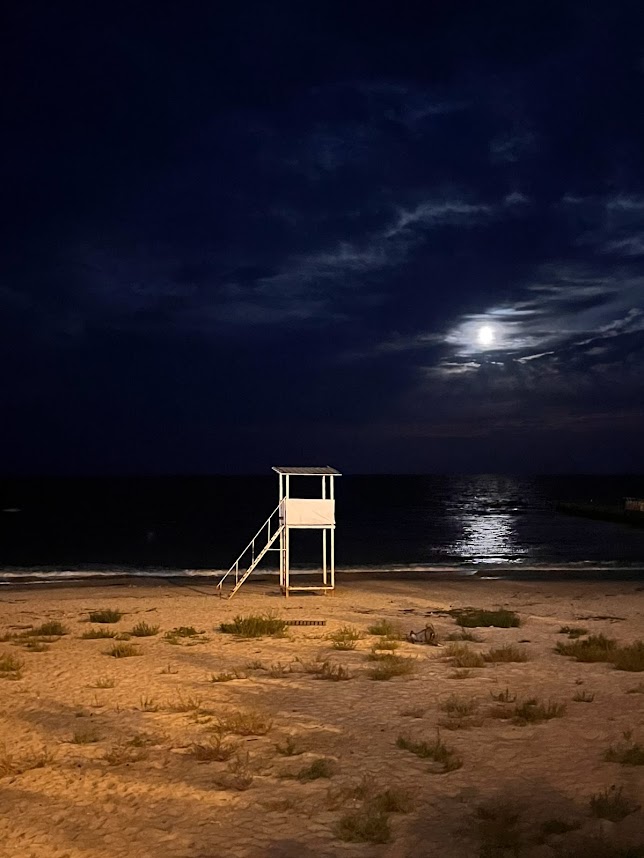 Right before the Health Walk begins and Arcadia ends, there are two great restaurants to check out; for genuine Odesa-style seafood there is Black Sea (Черноморка), and to the left of it is Krym, serving Ukrainian Tartar and Crimean dishes. Both have great sea views and are nice for romantic dates, or gatherings with family and friends. 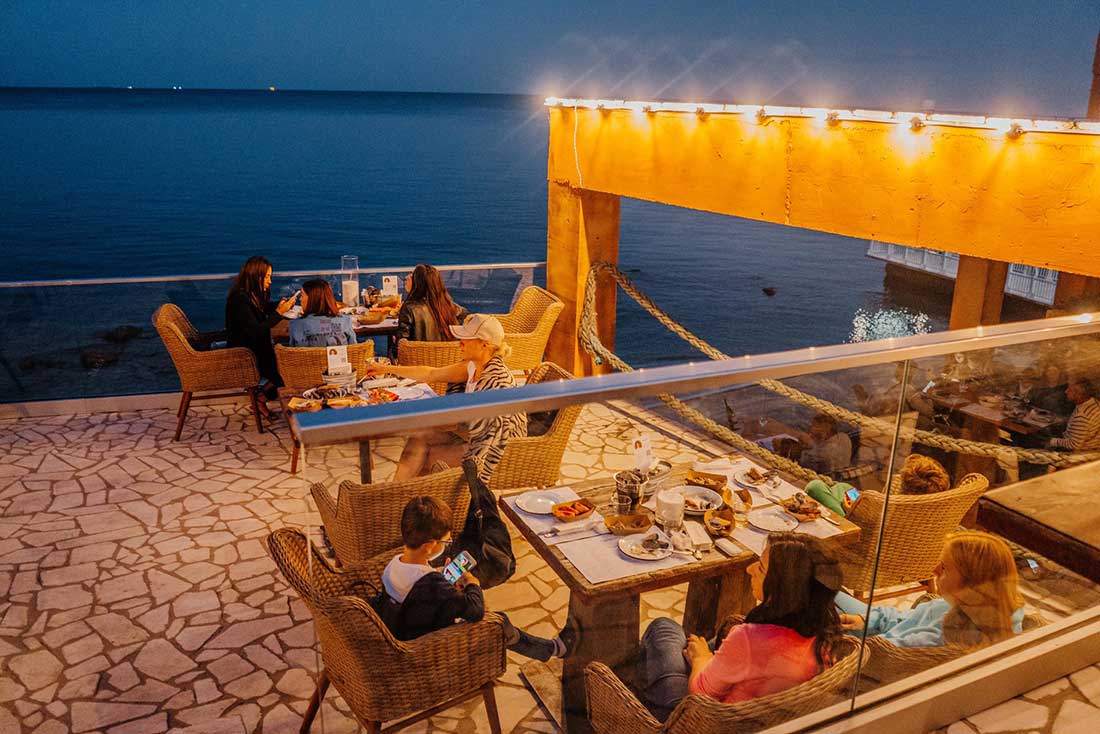 The bottom of the alley, going right

If you head right at Ibiza, this is the quieter part of Arcadia. There is the entrance to the Aquapark Hawaii (upstairs is Pizzeria Pomodoro, only open during tourist season), and a short distance further on the right, is the Soviet-era Morskoy Hotel, which has a year-round indoor swimming pool that is always a joy to swim in no matter the weather. You don't need to be a guest of the hotel, just pay an entrance-fee at the desk and they will give you a locker key. Note that sometimes it is busy with children's swimming lessons, but usually, you'll have the pool to yourself. 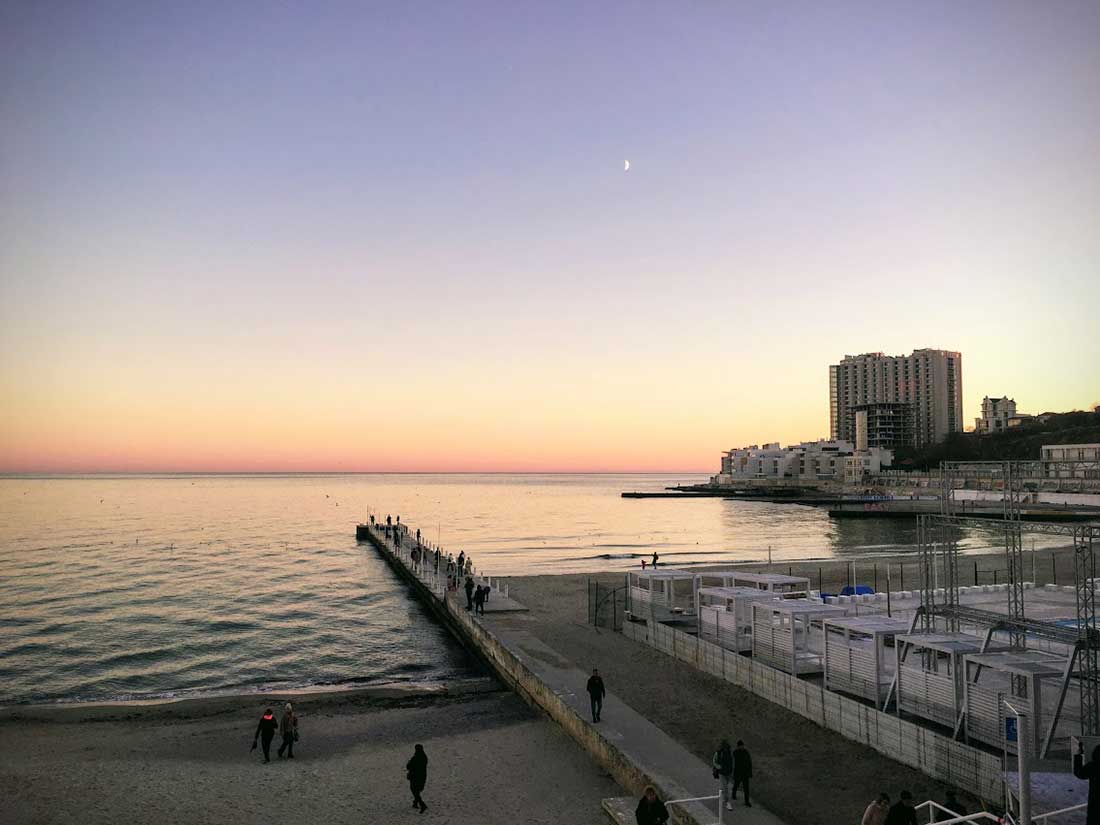 The pier between Ibiza and Itaka beaches during off-season, as seen from the KFC

If you keep walking further, you will find some restaurants and a nice beach with a veranda viewing platform that is leftover from Soviet times, right near a restaurant bar designed to look like an old sailing ship. A great place to relax and catch the sunset. 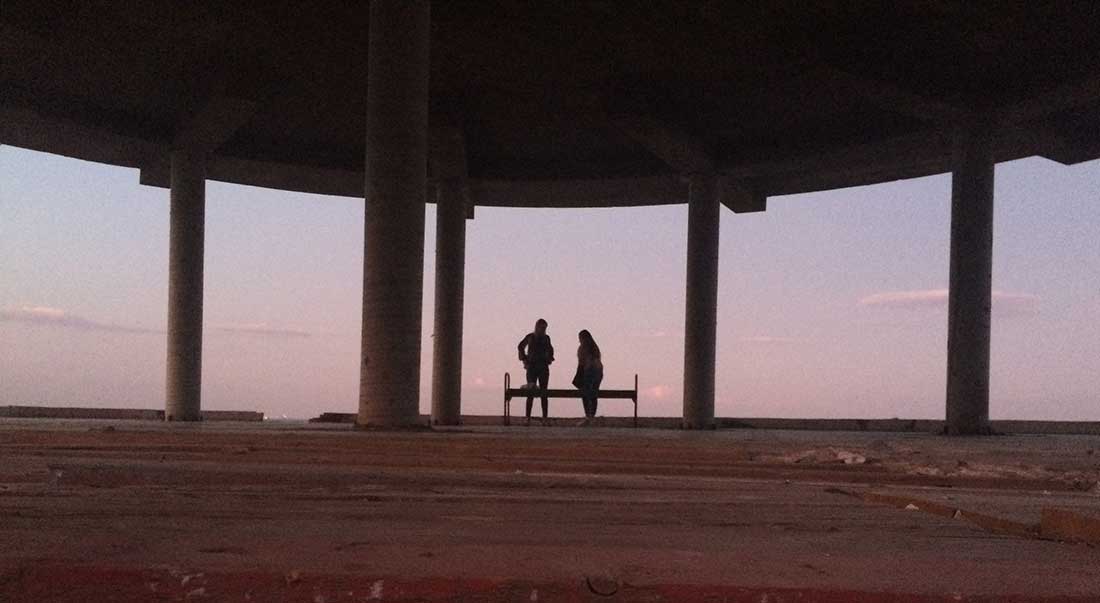 Below the viewing platform (which is sometimes turned into a cafe/bar during tourist season) is a free beach to relax on, but the beach is pebbles and not sand, so bring a thick blanket, and the Medea Hotel with its own sea view cafe/restaurant, in the old Odesa style. Keep walking onwards down a popular path past newly built private rental houses along the seawall, if you go to the very end, there is a small private boat harbor. A nice walk along the sea awaits you.

Explore all year round!

There is much to discover in Arcadia, the businesses are constantly reinventing themselves and the sea never changes, making a nice contrast to living in Odesa. The perfect place to feed the birds, contemplate your life, and have a sunset picnic with your family and friends, in Arcadia, there is something for everyone, all year round!